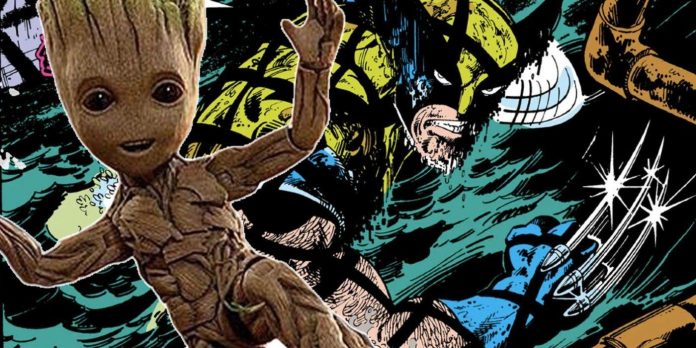 Adorable Baby Groot instantly became a fan favorite due to being included in the final credits scene of the MCU’s Guardians of the Galaxy, but a miniature version of Groot did not appear in comics until 2015 in Groot #4. The extraterrestrial tree has had several forms over the years, but the children’s version is one of its most popular, and the panel that finally features a pint—sized hero is a secret homage to another Marvel hero, Wolverine.

A sentient tree named Groot originally debuted in Stan Lee and Jack Kirby’s Tales to Astonish #13, but it has since been retconned that the hilarious super-powered Groot from this story is not the one currently serving in Guardians of the Galaxy. . The Groot that fans know and love is Flora Colossi from Planet X. He is best known for his friendship with Rocket Raccoon, his inability to say anything other than “I am Groot”, and his ability to regenerate from even the smallest twig. It was thanks to this power of regeneration that Baby Groot finally appeared on the pages of comics.

Related: Groot is Secretly One of Marvel’s Smartest Superheroes

In Groot’s first solo series, Rocket is kidnapped, and the main tree monster finds himself alone for the first time in a long time. In Groot #4, written by Jeff Loveness and designed by Brian Kessinger, Groot gathers a group of aliens in an attempt to save his long-lost friend, but the plan does not go as desired. Despite being one of the most powerful members of the Guardians of the Galaxy, Groot is still beaten and apparently destroyed. Only one branch floats in the disgusting and strangely familiar sewer system. Then a small wooden hand reaches out to grab the phone and a ghostly form appears, and the last panel of the comic finally shows the first appearance of Baby Groot. However, some readers may notice the similarity of these panels to a particularly famous set of panels featuring another unkillable Marvel comics hero, Wolverine.

The mentioned panels are taken from the Dark Phoenix saga, in particular, from the classic book “Strange X-Men # 132” by Chris Claremont and John Byrne. When the X-Men are attacked by the Hellfire Club, Wolverine apparently dies and is flushed into a similar-looking sewer system. But since even the most powerful heroes cannot kill Wolverine, one hand in a blue glove appears out of the water, followed by a very angry Logan. If you compare the original Uncanny X-Men panels with Groot’s panels, you will see that they are recreated frame by frame, and even the lower red text field is made in a similar font and style. This is a fun little tribute to Logan and all fans of classic Marvel comics.

Although they may be very different from each other, comparing the two heroes works because in the last moments of their respective problems, both were seemingly killed, only to become stronger again and more determined to save their friends. This scene is not only a funny tribute, but also helps to convey exactly what should happen next. Groot may say “I’m Groot,” but it almost certainly translates to “Okay, suckers, you did your best! It’s my turn now!”

It may seem strange for Marvel to introduce Baby Groot, a character cuter than Baby Yoda, with an homage to the adamantium-clawed killer, but this moment works well. Groot’s solo series is more comedic than the Dark Phoenix Saga, but this intro reflects both Wolverine’s determination and Kid Groot’s mocking tone as a character.

The 10 best ships from “Star Wars” according to Reddit