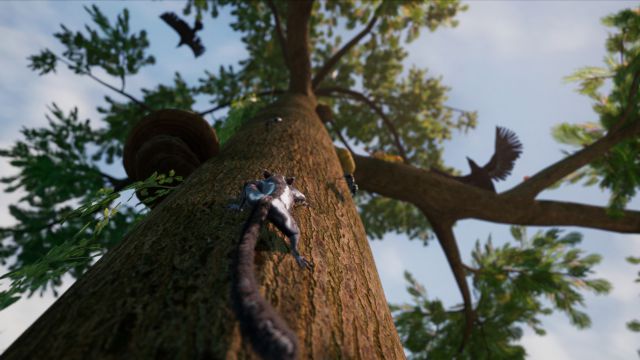 Away: The Survival: The small studio Breaking Walls, made up of Ubisoft veterans, offers us a new experience with an adventure of animal survival. If we investigate the catalog of any platform we will see that there is no shortage of games that consist of simulating animal life. Titles like Maneater or Goat Simulator put us in the shoes of non-human species and sow chaos, but yes, always from an almost hyperbolic or humorous point of view, or in some cases, both, but it would be difficult to find one that represents nature in a more reliable way. Away: The Survival Series comes a little to fill that space, also making us recreate the life of a somewhat unknown species such as the sugar glider, which in just a few hours makes us discover how hard life can be for a mammal that It is both prey and predator, but … does it do it in a fun way?

Away: The Survival Series starts from a curious premise, and that is that man has been completely extinct from the planet due to the explosion of a multitude of the sadly famous volcanoes lately around the globe, with which animals of all species are the main inhabitants of the Earth. The glider is only one of those that we will see throughout the adventure, but he is precisely the protagonist, and the one who will face a diverse series of dangers to face with his abilities.

An adventure in the form of a documentary

After a brief tutorial in which to learn all of them, we have to highlight some such as gliding, a quite generous capacity jump and the one that could not be missed, an animal instinct that warns us of nearby dangers or possible foods, in a way that if If we had to compare it, we could speak of a kind of thermal vision. Obviously, the use of this instinct is not infinite, and it will be necessary to maintain good energy levels with the intake of foods such as mushrooms or other small animals.

That said, it must be said that the control of the little protagonist is not as precise as we would like, especially when jumping and planning, sometimes having to adjust the landing at the last minute so that our destination is not death. This means that one of the playable sections of the title, such as the platforms, are not satisfactory, at least in the most demanding sections, although luckily we have the possibility of pointing out the landing place after a jump, something that makes things much easier.

Another of those sections is combat, clearly differentiated when we become predator or prey. In the first case, it is not something that stands out very much, since it is not difficult to account for small lizards or insects with which to fill the crop, but if we face other animals such as snakes or spiders, things change, and we must pass to adopt a more defensive attitude, having to wait for the mistake of our opponent to make a counterattack until we can free ourselves from the threat. They are not particularly complicated combats, but they provide that little bit of variety necessary and convey to us the frequency with which small animals can see their lives threatened on any given day. Some of them even end up in chases that take the form of quick time events, something that adds some tension although like almost all situations that occur during the course of the adventure, it is not something that requires a special ability to command.

Scream 6 Will Premiere Sooner Than Expected; Know Date And Details

What If …?: The Lost Episode Dedicated To Gamora And Tony...