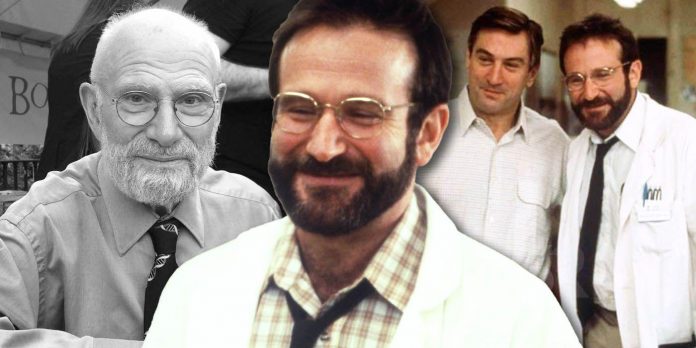 The Awakenings movie is a dramatization of the 1973 memoir of the same name – here’s the true story behind the semi-fictional Dr. Sayer in the Awakenings movie. Directed by Penny Marshall, Awakenings is a retelling of the groundbreaking work carried out by Dr. Oliver Sacks, the author of the Awakenings book. In 1990, viewers were treated to a drama story starring Robin Williams (who, even though he played a more drama-oriented character, added a touch of his particular sense of humor) and Robert de Niro. The pair play doctor and patient in a story that’s equal parts heartwarming and heartbreaking. Even though it came out over 30 years ago, many still want to know the Awakenings true story.

Awakenings follows neurologist Malcolm Sayer (played by Robin Williams), who in 1969 while working at a hospital in the Bronx, begins extensive research on catatonic patients who survived the 1917-1928 epidemic of encephalitis lethargica. Sayer later learns of a new drug that helps patients suffering from Parkinson’s disease and believes it could be of use on catatonic patients. Sayer runs a trial on patient Leonard Lowe (de Niro), who completely “awakens” and starts to show major improvements, but the experiments soon come across some obstacles that threaten the life quality of the patients who were just starting to deal with a new life in a new time. As mentioned above, Awakenings is based on the memoir of the same name by Oliver Sacks, and the drug and experiments shown in the movie are actually real. Despite being fictional it’s a historic medical experiment drama like Them (although not a horror).

Dr. Sayer is based on Oliver Sacks, a British neurologist, naturalist, historian, and writer, who wrote various best-selling books recounting case studies of people with neurological disorders, including himself. Sacks suffered from prosopagnosia, also known as “face blindness,” a cognitive disorder of face perception that affects the ability to recognize familiar faces including one’s own face. This disorder was the basis for his book The Man Who Mistook His Wife for a Hat, published in 1985. Over a decade earlier he wrote a book about the Awakenings true story recounting the life stories of the victims of the 1920s encephalitis lethargica epidemic. Also known as “sleeping sickness”, this disease attacks the brain and leaves victims in a “statue-like condition, speechless and motionless”. It’s similar to locked-in syndrome, the condition featured in Neil Blomkamp’s 2021 Demonic. Sacks described the patients as “conscious and aware – yet not fully awake” and started studying and helping patients at Beth Abraham Hospital in the 1960s. The Awakenings cast brought Oliver Sack’s work with sleeping sickness to life, especially Williams as Dr. Sayer, and it’s a Robin Williams doctor movie that avoids the saccharine qualities of Patch Adams.

The drug Sacks began using on catatonic patients was L-DOPA, also known as levodopa, an amino acid precursor to the neurotransmitters dopamine, norepinephrine, and epinephrine (adrenaline). L-DOPA is used in the treatment of Parkinson’s disease, but Sacks saw its potential in helping other diseases. According to an article by AP News back in 1991, de Niro’s character Leonard is based on a real patient of Sacks, described as “an exceptionally well-read man, freely quoting philosophers and writing insightful book reviews”. Leonard, as well as many other patients, initially had a positive reaction to the drug and fully awoke, but just like in the movie version of Awakenings, Leonard began to become paranoid, developed severe tics, and ended up regressing to his earlier catatonic state, and passed away in 1981.

Of course, Awakenings made various changes to the stories of Sacks’ patients, but as it counted on Sacks as technical advisor, the crew made sure that it stayed true to the essence of the book and gave a true yet devastating portrayal of encephalitis lethargica and its effects. Character-actor and adlib extraordinaire Robin Williams and Oliver Sacks were close friends by the time both sadly passed away, and it was on the set of Awakenings that they met. Williams spent a lot of time with Sacks to make sure that his character Dr. Sayer didn’t stray too far from the Awakenings true story. The late Williams even cited portraying Sacks/Dr. Sayer as his favorite role in a Reddit AMA, “I think playing Oliver Sachs in Awakenings was a gift because I got to meet him, and got to explore the human brain from the inside out. Because Oliver writes about human behavior subjectively and that for me was the beginning of a fascination with human behavior.”  Oliver Sacks passed away in 2015 after battling cancer, but his works live on in written form and their various adaptations, though Awakenings remains the most famous one.

Awakenings Book Vs. Awakenings Movie: What They Changed

There are many differences between the Awakenings book and the movie. The most notable is that Robin Williams wasn’t cast as Oliver Sacks – he plays a character based on Sacks named Dr. Malcolm Sayer. This was a deliberate decision to give the writers artistic license for dramatic scenes and friction that didn’t occur in real life (including flirting with a female nurse, which the real Oliver Sacks never did, as he was gay). The patients in the story have had the more violent or sexually aggressive elements of their symptoms toned down, too. DeNiro’s character is perhaps the closest to their literary counterpart, but even Leonard Lowe has some moments in the Awakenings movie that don’t appear in the book. Again, these are flirtatious moments that are clearly added to inject some Hollywood drama and keep audiences engaged.

The pacing of Awakenings is different in the movie, but this works for the heartfelt story that’s bolstered by Williams and one of the many powerful roles DeNiro transformed to play. Crucially, the key moment when the patients “awaken” took place over a few weeks in the book. They didn’t awaken all at once. This condensing of events is pretty standard when adapting literature to the screen though, and the project was conceived with Oliver Sacks’ full involvement. What the movie didn’t change much was the impact of the absolutely debilitating illnesses Dr. Sacks/Dr. Sayer treated. Illnesses like “sleeping sickness” are, after all, at the core of Awakenings’ true story and the work Dr. Sacks carried out, so it makes sense that the harrowing impact of catatonic conditions is the element of Awakenings least tampered with when it was brought to the big screen.

“Sonic the Hedgehog 2”: what fans should watch next on Paramount+