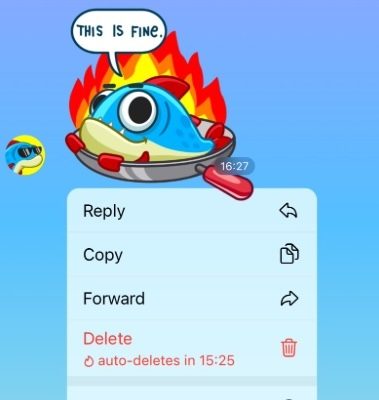 Telegram, which has become one of the most preferred messaging applications, has introduced the feature of automatic deletion of messages that can be set with a timer.

Telegram, which has become increasingly popular after Whatsapp’s controversial confidentiality agreement, has come with new features that will be very useful for users. With the latest update, users have a timer feature that will automatically delete the messages they send.

Among the new features, limiting that allows to limit the number of people in Telegram groups and invite links that are automatically deleted after reaching a certain person have been added to the new features.

Only administrators can determine the time for groups and channels.

Like Signal, Telegram has a feature that has been available for a long time to delete messages automatically, but with the new update, users can use the timer to decide after how long their messages can be deleted after they are sent. The time options given currently only include 7 days or 24 hours.

In order to take advantage of the new feature, users must first press Clear Conversation and then Enable Auto Deletion after a long press on the message they send. Auto deletion only applies to messages sent after the feature is enabled, and users must specify after how long a message should be deleted. In addition, the specified time for sent messages starts immediately after the messages are sent, not after they are read.