Home News In Australia With Ash, Nature Begins to Revive 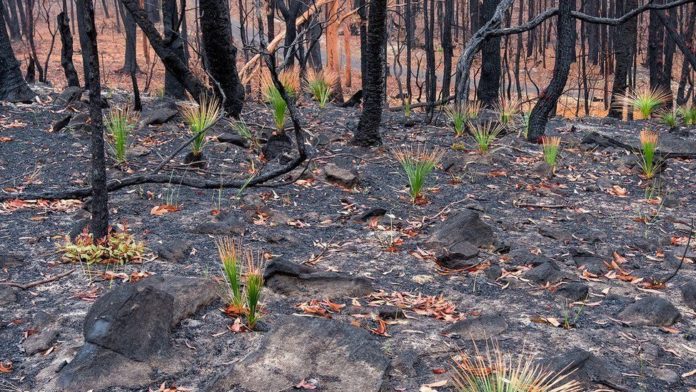 While the forest fires in Australia were in full swing, there was good news from the region. An Australian photographer reveals that life has resumed and some trees have blossomed in the area where the fire was extinguished.

The Australian continent is experiencing one of the most difficult periods in its history. Forest fires, which started regionally in September, have not been controlled despite the months passed and the continent is facing a huge balance sheet. So far, millions of hectares have disappeared and at least half a billion animals have lost their lives due to fires.

Now, however, there has been good news from Australia. The development shows that millions of hectares of land have begun to show signs of life again, even if they will not bring back the vanishing animals. Because the places with ash, slowly began to navy with new plants. Nature is beginning to gather itself in Australia.

In Australia, nature began to repair itself
The photo you see above was taken by Murray Lowe, an Australian photographer. Lowe, the image above is one of the most affected states of fire in New South Wales, he says. Lowe’s main goal was to expose the destruction in the region, but the image he faced was met with joy all over the world.

Lowe states that the area where he took these photographs has been completely destroyed. Lowe, however, said the images are promising, and it is of great importance for Australia that nature begins to renew itself. Lowe says we have witnessed the rebirth of one of Australia’s most famous forests.

While nature is trying to somehow return to life, fires continue in much of Australia. Officials say temperatures in the region will continue to rise, which could cause fires to spread. It seems that Australia will continue to be one of the main issues on the agenda in the coming days.