Home Tech Aurora 7, this is the laptop with 7 screens 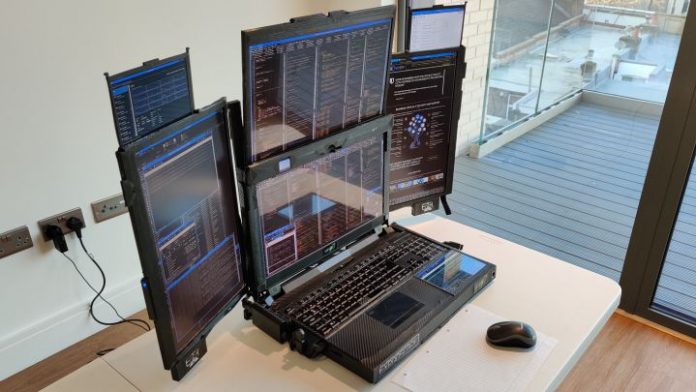 With the confinement and new telecommuting initiatives many have set up their own home office position. Some do not need more than the most basic equipment, from a simple laptop to the most basic pack of computers. But others need more than one screen to work, which has forced to spend a little more money to have it at home as well. But the next thing we’re going to tell you about is the arrival of the new Aurora 7, a laptop with 7 screens.

Yes, the Aurora 7 has 7 drop down screens

Having more than one screen is a luxury for many, although you can also work with just one. This can be debatable for all those who work in a high capacity Excel, process data or are designers who need extra workspace. But many may find it interesting to know that there is a computer in the world that can be taken wherever they want and that has up to 7 screens.

With this concept the Aurora 7 is presented, a team designed by the recently created British company called Expandscape. The company raises a large team given its characteristics and weight. Specifically, we are talking about a laptop with 51 x 34 x 11 cm closed, but it reaches 96 x 6 x 59 cm when expanded. This is not to mention the 12 kg of weight that it has.

What does it occupy in this size? Well, to start with a 17.3-inch central screen and 4K resolution to which we must add another that is displayed at the top and two others in vertical format with the same characteristics. On the two verticals two seven-inch are placed and the seventh is located near the trackpad.

The Interior of the Aurora 7

We have already told you what makes this computer special, which by name could pass for that of a rocket. And the truth is that it does not have to envy any computer thanks to its premium features. We are facing an Intel i9 processor with 64 GB of RAM and 4.5 TB of internal space divided into several SSD and M2 hard drives. In its graphics it presents an NVDIA GTX 1060 GPU. It also has three USB ports and an HDMI along with a battery that yields up to 2 hours of autonomy, which is reduced to half an hour using the seven screens.

Aurora 7 M3, the most powerful

The Aurora 7 is still in the development phase, but the British company has ventured to make a much more powerful version. This will carry the surname M3, which has improvements at the processor level with a 10th generation Intel i9, 128 GB of RAM, 8TB of storage and an even more powerful graphics: the NVIDIA RTX 2070.