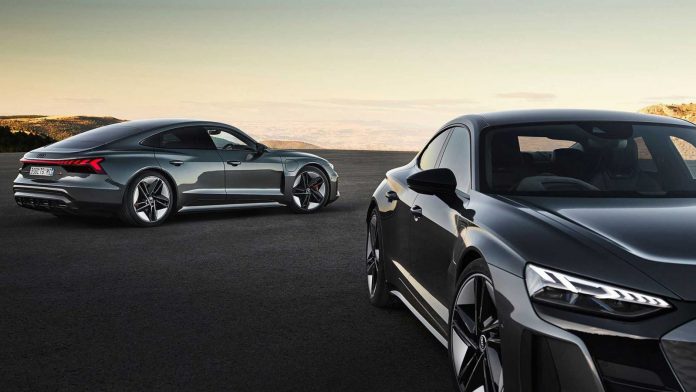 Taking firm steps forward in the electric car market, Audi introduced the long-wondered new sedan E-Tron GT. E-Tron GT, which will have two different equipment, Standard and RS, will be available in the coming summer.

The GT, powered by 800 Volt electrical architecture like Porsche Taycan, is offered for sale with two different equipment, standard and RS. The standard GT 476, while the RS GT produces 598 horsepower. The RS GT, which accelerates from 0 to 100 kilometers in just 3.1 seconds, has a driving range of 373 kilometers with a single charge.

The e-tron GT is expected to go into production next spring and be available in the US in the summer. Both equipment have 2 different engines, front and rear. These engines allow the car to be 4-wheel drive.

The standard GT model has 476 horsepower and the RS version has 598 horsepower. In both versions, these powers can be increased by an overload called “overload”. Thanks to the 93.4 kilowatt battery support, both models have a driving range of 370 – 380 kilometers, according to factory data.

As many of you know, Audi and Porsche design their electric cars on the same platform, so the car data of both brands are very close to each other. Designed on an 800-volt electrical architecture, GT’s batteries go from 5% to 80% in just 22.5 minutes.

Seat covers are made of recyclable fabric.

Of course, the GT’s speed and batteries are not the only remarkable features. As we mentioned before, the model, which manages to combine a luxury experience and superior performance, offers users a 12.3 inch digital cockpit and a 10.1 inch multimedia screen in the interior. Through this multimedia screen, all equipment specific to Audi can be accessed, navigation and driving mode controls are made on this screen.

Audi also states that the seat upholstery is not leather, but a recyclable fabric, which indicates that it is an environmentally friendly company. However, customers who do not want to give up genuine leather seats can benefit from the optional Nappa leather upholstery.

In terms of design, the GT, which has the appearance of a four-door coupe just like the Taycan, appears to be a sporty and muscular car in general terms. The GT has 20-inch wheels on the standard version and 21-inch wheels on the RS version and has optional Matrix LED headlights exclusively for the European market.

The auto giant has set the starting price of the e-tron GT in the USA to be $ 99,900. The cost of the features that can be purchased optionally can exceed 10 thousand dollars. Prices for the RS start at $ 139,900, and when we compare these prices with rival models, we can say that Audi was extremely generous.

The best Netflix movies of all time!