Home Entertainment Attack of the Titans Season 4 Proves the True Power of the... 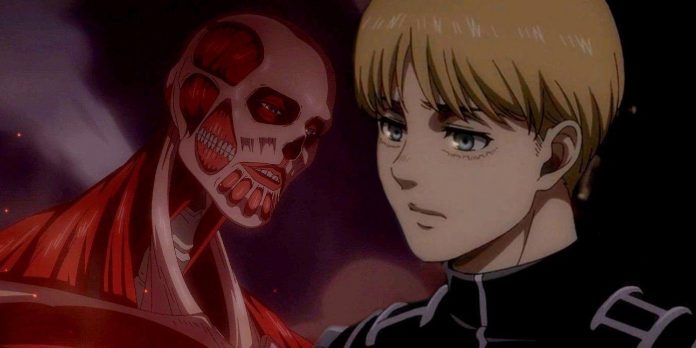 Attack On Titan season 4 reestablishes the Colossal Titan as the show’s most terrifying transformation. When anime fans hear the word “titan,” the first image that comes to mind will probably be the Colossal Titan peering over Wall Maria as a young Eren watches on from below. Despite being just one of nine different Titan-shifters, the Colossal Titan’s image has become synonymous with Attack On Titan since the 2013 debut of Hajime Isayama’s widely-acclaimed series, but the Colossal’s ferocity hasn’t always been matched by his feats in battle.

When Attack On Titan begins, the Colossal is possessed by Bertholdt Hoover, and kicks down the gate of Wall Maria, allowing his Armored Titan ally and a herd of Titans to pass through unimpeded. Bertholdt later transforms to battle Eren and the Survey Corps at Trost, and again while trying to take Eren back to Marley. Bertholdt’s final transformation comes during the Battle of Shiganshina, where he loses the Colossal Titan to Armin, who reveals his new form in Attack On Titan season 4 episode 7.

Under Bertholdt’s control, the Colossal Titan certainly impressed visually, but didn’t always fulfill its mammoth potential. Bertholdt’s first job was simply to kick a door in and look menacing – a mission he accomplished with aplomb. In his next two battles, Bertholdt only partially transformed, taking advantage of his Titan’s steam defense to keep enemies away. Bertholdt fully transforms again during the Battle of Shiganshina, and causes mass destruction with the same attack Armin uses in Attack On Titan season 4. However, Bertholdt’s final battle took place in a ghost town, meaning the true magnitude of the Colossal Titan’s awesome strength was never realized on screen.

Armin solves that problem with his very first appearance in Attack On Titan season 4. Emerging from a small fishing boat, Armin’s explosive transformation decimates Marley’s naval reinforcements and sends a shock wave that reaches all the way to the main battlefield at the Eldian Internment Zone. In the wake of the transformation, a huge, fiery crater is left behind, with wrought metal hanging from the ground and debris stretching across dozens of streets. Armin ruefully treads over the bodies poking out from under his wreckage. It’s a much more vivid and distressing visual than any of Bertholdt’s transformations and easily the most destructive example of the Colossal’s power in Attack On Titan so far.

Why Armin (Not Bertholdt) Uses The Colossal Titan’s Full Power

Given the intense training Marley puts its Warrior candidates through, Bertholdt’s lower-key Titan usage isn’t due to Armin being better than him at wielding the Colossal Titan. So why doesn’t Bertholdt use his greatest power more often? When the Colossal first appears in Attack On Titan, the children from Marley are seeking to infiltrate the walls, not destroy recklessly. Bertholdt was also the most peaceful of the invading trio, and wouldn’t have claimed lives unnecessarily. Then, at Trost, the two sides fought in a close quarters battle, which made the Colossal Titan’s true power completely impractical.

Only during the final Shiganshina battle did Bertholdt release his full destructive ability – but on an empty Shiganshina district that had already fallen to ruins. Armin’s transformation in Attack On Titan season 4, on the other hand, showcases the same nuclear attack – this time in the midst an entire naval fleet and in a densely populated location, bringing the full force of the Colossal Titan firmly into view. The aftermath is far clearer than during Bertholdt’s detonation too, serving to reaffirm the Colossal Titan as the most terrifying of Attack On Titan’s nine transformations.

Related: When Eren Jaeger Became A Villain In Attack On Titan

Showing the full scale of the Colossal Titan’s abilities in Attack On Titan’s final season isn’t just about providing a harrowing visual. Despite his sympathetic nature, Bertholdt was still one of Attack On Titan’s antagonists, whereas Armin is one of the most virtuous characters still alive in season 4. Watching him, of all people, cause such devastation is a stark reminder of how blurred the lines between hero and villain have become.

Will Armin Fight Eren As The Colossal Titan In AOT Season 4 Part 3?

With Attack On Titan season 4 part 3 set to premiere in 2023, adapting the final nine chapters of Hajime Isayama’s manga, the Survey Corps are coming down to the wire in terms of taking down Eren’s enormous, all-powerful Founding Titan. If they want to have any hope of winning, Armin’s Colossal Titan could be a key tool in their belt. It’s hard to imagine childhood best friends Armin and Eren going head-to-head in a Titan fight, but considering Attack On Titan season 4 part 2 already offered fisticuffs between the characters’ human forms in episode 14 (episode 73 of the series overall), it’s not too much of a stretch. Likewise, Armin’s Colossal Titan does face Eren’s Founding Titan in battle in the Attack On Titan manga, so the anime is very likely to adapt it. As for who would win, as impressive as Armin’s full Colossal Titan abilities are, he’s probably still no match for Eren’s even greater size, presumable strength, and command of an entire Colossal Titan army. Attack On Titan‘s final battle should still be an epic event to behold.

Payday 2 Takes On The Concept Of Halloween