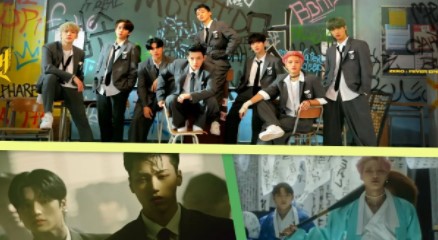 There is little left for us to listen to all the songs of ATEEZ’s ZERO: FEVER EPILOGUE that surprised their fans with new versions of their Kingdom songs, one of them is ‘The Real’ that will have a very special MV and its teaser proves it.

ATEEZ has everything ready to return to the stage and is already exciting all his fans for the release of ‘ZERO: FEVER EPILOGUE’, his next mini album that promises to be full of power, of this the first MV with his song ‘Turbulence’.

But there is much more that ATEEZ will bring us with their comeback and in the tracklist of their next album we find some of the songs they performed in their participation in ‘Kingdom’, a reality show where they managed to shine with their tracks and performances.

This is why ‘ZERO: FEVER EPILOGUE’ is already generating great expectations for ATINY, who will have new versions of songs with which the K-Pop group caused a great impact on reality; Good results are forecast for the next comeback thanks to the great talent of the idols.

One of the songs that he liked the most in ‘Kingdom’ was ‘The Real’ that we will be able to hear on the next ATEEZ album and it will also have an official MV, the group has revealed a bit of it in their new teaser.

On the official channel of KQ Entertainmente, the agency that leads the career of ATEEZ, on YouTube we can find the most recent advance for ‘ZERO: FEVER EPILOGUE’, it is about the teaser for the MV of ‘The Real’, where we can return to the concept schoolboy carrying the album but full of chaos.

It also shows us the more traditional side of idols with typical Korean costumes and the beautiful fans that have been used in various dances.

When Is Ateez’s Mv For ‘The Real’ Released?

ATEEZ’s ‘The Real’ MV premieres on December 10, the same day they release the full album of ‘ZERO: FEVER EPILOGUE’ and they will delight their fans with new songs, music videos and excellent performances.

Do you have everything ready for ATEEZ’s next comeback? There is no doubt that they fill their fans with emotion with each new advance and that ZERO: FEVER EPILOGUE will be magnificent.

Selena Gomez showcases her villa for over $ 3.7 million!