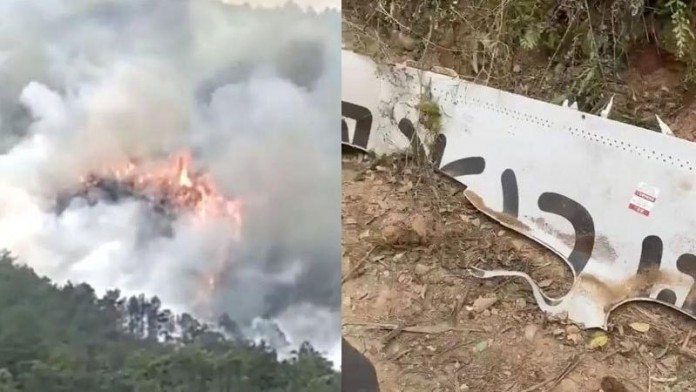 A Boeing 737 passenger plane of China Eastern Airlines crashed into a mountain in the Guangxi Autonomous Region in southern China. A fire started where a plane with 133 people crashed. Extinguishing and search and rescue operations are continuing…

A Boeing 737 belonging to China Eastern, one of China’s largest airlines, crashed on a mountain in Teng City in Wuzhou City, located in the Guangxi region in the south of the country. Flames engulfed the crash site of the plane with 133 people. It is not yet known how many people were killed or injured as a result of the accident, while work continued to extinguish the fire.

According to Flight Radar 24, the flight began at 13:11 local time. The radar data stream was interrupted when the clock showed 14:22. Of the people on board, 123 people were passengers, the rest were crew members.

When the flow stopped, the plane was at an altitude of 982 meters above the ground and was moving at a speed of about 700 km/h:

Images taken away from the scene of the accident show the extent of the fire:

The flight schedule of the aircraft from takeoff to the moment of the accident in 1 hour 11 minutes:

As can be seen on the planned route highlighted in red, the latest data from the plane that took off to transport passengers from Kunming Province to Guangzhou was received during the flight over the Wuzhou area where the accident occurred. The course of the aircraft in real time is shown by a blue line.

Again, according to Flight Radar 24, the crashed Boeing 737-800 aircraft was produced 6 years ago. According to Reuters, China is one of the most successful countries in the world in terms of airlines, and the last fatal plane crash in the country occurred in 2010, and 44 passengers out of 96 died in this accident.