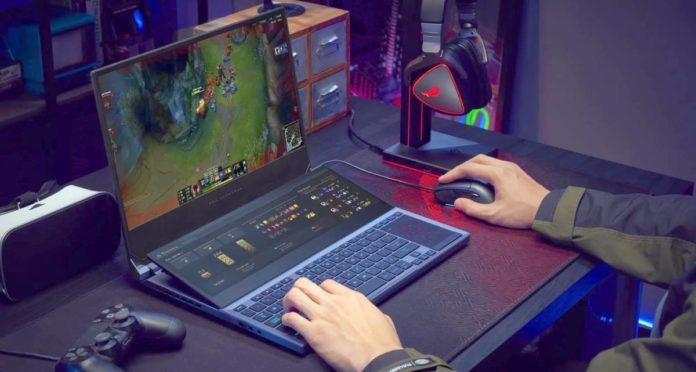 As one of the largest hardware manufacturers, ASUS introduced the world’s first dual-screen gaming laptop ASUS ROG Zephyrus Duo 15. The new laptop has two displays, one 15.6 inches and the other 14.1 inches.

As one of the first names that many people think of when it comes to computers, ASUS has made another addition to its gaming computer series today. The company introduced the ROG Zephyrus Duo 15 computer, which will be the latest member of the ROG series. However, there is a very important feature that will distinguish this computer from other player computers.

ROG Zephyrus Duo 15, introduced by ASUS today, is the world’s first two-screen gaming computer. The ROG Zephyrus Duo 15 has another 14.1-inch screen just below the 15.6-inch main screen. Both screens are in a position to be self-contained with their features.

The world’s first two-screen gaming computer:
ASUS ROG Zephyrus Duo 15’s home screen has two different modes. Users can set this screen to 4K resolution if they wish, or FHD (1080p) if they wish. When the screen is brought to 4K resolution, the refresh rate is 60 Hz, while in FHD this value rises to 300 Hz.

The second screen on ASUS ‘revolutionary gaming computer has a single mode. This mode offers users a resolution of 3840×1100 pixels and a refresh rate of 60 Hz. ASUS has also integrated a unique system into the computer so that users can view and manage both screens simultaneously.

The system that ASUS puts on its new player computer puts the upper part of the second screen in a 13-degree position. Thus, while playing games from the computer, players can see both the first screen and the second screen at the bottom effortlessly.

ASUS has not made any cuts in the hardware section to fully feed both screens of the new computer ROG Zephyrus Duo 15. ASUS ROG Zephyrus Duo 15 has the 10th generation Intel i9-10980HK processor and NVIDIA GeForce RTX 2080 Super graphics card.

In addition, the dual monitor gaming computer hosts 32 GB DDR4 3,200 MHz RAM. The computer contains 2 TB of RAID 0 SSD storage so players don’t experience any waiting. In addition, there is a 90 Wh battery.