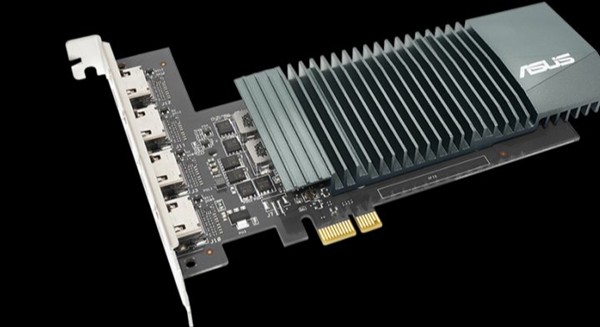 Asus reintroduced Nvidia’s GT710 GPU, which was used 6 years ago, with a passive cooling system. Installing 4 HDMI slots to support 4 monitors, Asus has turned the market target to businesses.

ASUS introduced a new graphics card for use in business. Introduced with the support of “silent multi-monitor” with the name GT710-4H-SL-2GD5, the new GPU will not be pleasing for those who want to play, but it will be a great alternative for business computers. The new graphics card, which will support up to 4 monitors in areas that do not require high processing power GPUs, is installed on the computer via a PCIe 2.0 x1 connection. The GPU, which comes with a passive cooling system without any fan, minimizes the risk of fan failure and maintenance as well as being quiet.

There’s Nvidia inside
The video card, which has a Nvidia GeForce GT710 GPU with 2 GB of GDDR5 memory, released 6 years ago, supports 4K resolution via 4 HDMI ports. The GPU, which technically supports up to 16K displays, seems to be unable to reach 16K in reality. The business GPU, which reduces the refresh rate from 60 Hz to 30 Hz when running 2 4K monitors at the same time, can support 4 monitors very comfortably with Full HD displays.

The card, which is expected to be used in areas such as large format screens, digital signs, static billboards, commercial workstations outside of the standard usage area, is thought to have several premium features compared to GT710.

Does the game play?
Although the graphics card, which does not have any fans on it, will play small-sized games up to a point, it may experience warm-up problems after a while, especially in games that care about graphics performance.