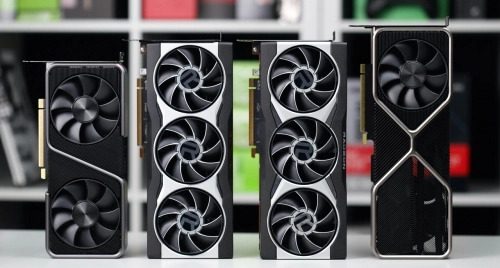 AMD Radeon RX 6700 XT models developed by ASUS have leaked features and some details. Among the models that were leaked is the model included in ASUS ‘gaming series TUF. The first visuals of the graphics card, which has AMD’s RDNA 2 graphics architecture, appeared with the development of ASUS.

The AMD Radeon RX 6000 series showed itself in two different ASUS versions for the RX 6700 XT, which is stated to be the first model under $ 500. However, it was reported that both models have the same GPU base and have similar features in VRAM.

When the resulting images are examined, it is seen that the TUF model has a triple cooling fan. It is striking that this model has a similar design to the NVIDA GeForce RTX 3060 and 3070 series cards. While there is 32.2 cm information for the length of the graphics card, there is information that it will come with a double 8-pin connector. It is stated that this is done for higher electricity consumption need with overclocking.

The second model that has emerged has a dual fan cooling system. This graphics card, which is 29.7 cm long, will appear before the players with its 8 + 6 pin connector configuration. Therefore, it is reported that this model may remain at lower values ​​in overclocking compared to the TUF model. Both models have RGB lighting.

For ASUS AMD Radeon RX 6700 XT specifications, there is currently 192 bit bus and 12 GB GDDR6 memory information. For both models, 384 GB / s bandwidth stands out, while 2560 stream processors and 40 compute units stand out. It is stated that the AMD Radebon RX 6700 XT will appear in two different variants as 189W and 230W.