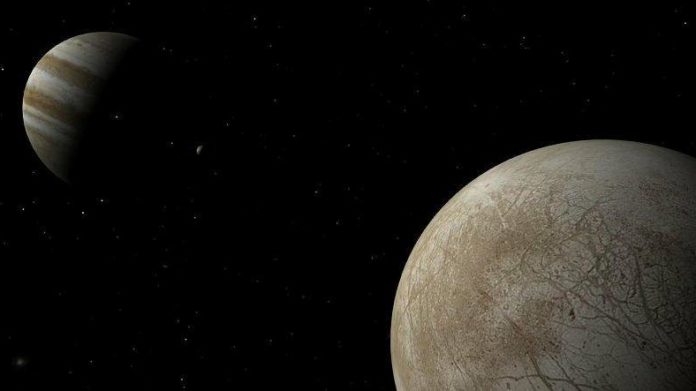 An English scientist suggested that octopus-like creatures might be living beneath the ice-covered surface of Europa, the satellite of Jupiter. The astronomer says he is almost certain that extraterrestrial creatures also live on Mars.

One of the topics that astronomers and humanity are most curious about is whether there is extraterrestrial life. An English scientist thinks that there may be life in a very remote place as researches continue on Mars due to its proximity to Earth. Monica Grady of Liverpool Hope University claims that life at Jupiter’s satellite Europa.

Europa, which is slightly smaller than the Moon and covered with ice, is thought to be a liquid ocean beneath the ice layer. Grady is almost sure that there are creatures beneath this ice surface. The astronomer thinks that there may also be creatures in underground caves on Mars. According to him, these caves protect creatures from dangerous radiation. The astronomer’s explanation is that the ice in the pores of the rocks may have functioned as water, while living things were protected from sun radiation in caves.

Octopus-like creatures can be:
However, according to Grady, life on Mars is small assets like bacteria. According to the British researcher, Europa is likely to have slightly more advanced life forms such as octopus. Grady says there is a high probability that the environmental conditions that provide human evolution on Earth will be found in other star systems, because, according to him, our Solar system is not a special planetary system, and we have not yet discovered all the stars in our galaxy.

Defending that there must be elements similar to those on Earth for the emergence of life on other planets, Grady says that the evolution of humans from small and furry mammals is possible with the extinction of dinosaurs as a result of hitting the sky with Earth. According to the scientist, this does not seem possible on every planet, but this is possible if we rely on the propositions derived from statistics.

In Jupiter’s satellite Europa, there is no atmosphere like Earth. This means that the satellite is exposed to high levels of radiation. Microbial fossils can remain under the ice for up to 10 million years. Thus, NASA may not have to undertake an excavation operation that is not possible with current technology.

Dr. of the California Institute of Technology. Nordheim says that amino acids can be found at depths of 1 to 3 cm in medium and high latitudes. In the equatorial areas, this depth may increase even more.