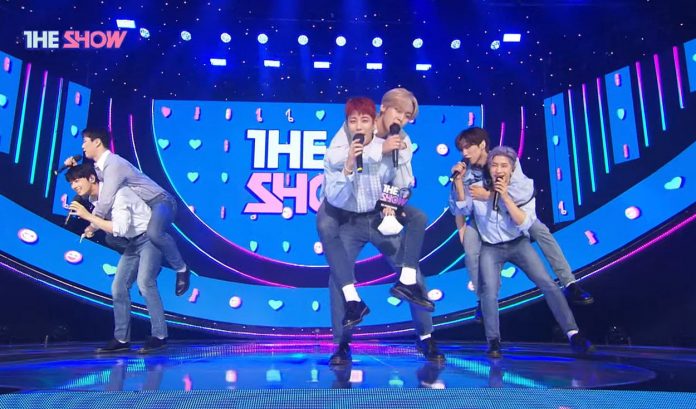 ASTRO’s Comeback got his first trophy on The Show. Fantagio’s group beat Golden Child and Dreamcatcher.

Just eight days away from their debut anniversary, K-pop group ASTRO celebrates the first win of “After Midnight.” The song was awarded on the MTV SBS music show The Show, and the performers met a fun challenge at the encore.

“After Midnight” is the title track of ASTRO’s eighth mini-album, Switch On. Cha Eunwoo participated in writing the lyrics, while Rocky and Jinjin prepared their respective rap lines.

This week, ASTRO was nominated for first place on The Show along with Golden Child and girl band Dreamcatcher. Fantagio’s group was superior in a score of all the criteria considered and lifted the trophy with a total of 9,520 points.

Jinjin, MJ, Rocky, Moonbin, Eunwoo, and Sanha’s live encore did not disappoint. True to their style, they celebrated with a fun challenge in which they had to sing their lines while carrying another member on their back.

For a couple of hours after the music program, the first four trending topic hashtags in Peru were allusive to ASTRO and their comeback. This was repeated in the trends in Mexico.

The AROHA fandom on this side of the world had woken up very early (due to the time difference) to see the results of The Show live. For this reason, they flooded social networks by spreading the triumph of their idols.

The memes were not lacking either to note that the streaming effort was worth the effort to add digital points.

The next goal ASTRO fans are working towards is to achieve 30 million views on the official video clip. As of August 10, they only need 3 million views to do so.

After the premiere of the main MV, the video clip of the performance version arrived on August 8. Such content currently exceeds one million views.