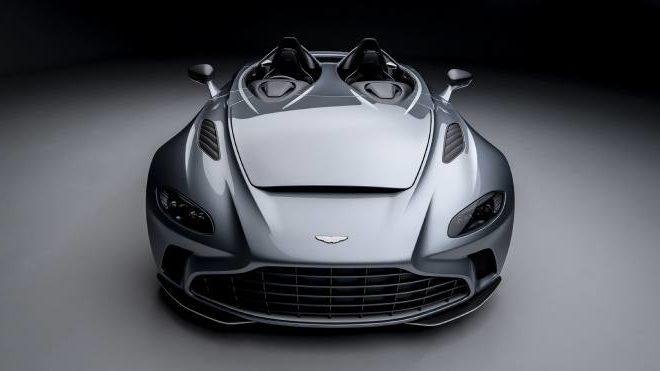 Aston Martin has produced a limited number of high-performance cars such as Lagonda Taraf and Vulcan in recent years. Today, a new car has been added to the list with the V12 Speedster, developed by the automaker’s special projects department.

Aston Martin V12 Speedster carries traces from the classic 1953 DB3S and 1959 DBR1, as well as the CC100 Speedster concept introduced in 2013. The V12 Speedster appeared as an open top car without a roof. Moreover, it does not have a windshield, just like McLaren Elva.

Thanks to its powerful equipment, the V12 Speedster can reach 100 km / h in 3.5 seconds. The car’s top speed is electronically limited to 300 km / h. Driving at a speed of 300 km / h without a roof or windshield that protects the driver is a challenging experience. Aston Martin used carbon fiber in the section that separates the driver and passenger seats to reduce the car’s weight as much as possible.

The interior design combined the leather trim with chrome, aluminum and 3D printed rubber, while the glovebox was replaced by a removable leather case. There are also two smaller storage areas located in the high parts behind the seats. At the rear of the car is dual exhaust in Skyfall Silver color contrast, mounted in the middle of the bumper.

Aston Martin has started taking orders for the V12 Speedster. The car’s starting price was set at $ 950,000. Production will be limited to 88 cars, and deliveries are scheduled to begin in the first quarter of 2021.