Home Entertainment Asterix & Obelix: Slap Them All! It Already Has a Release Date... 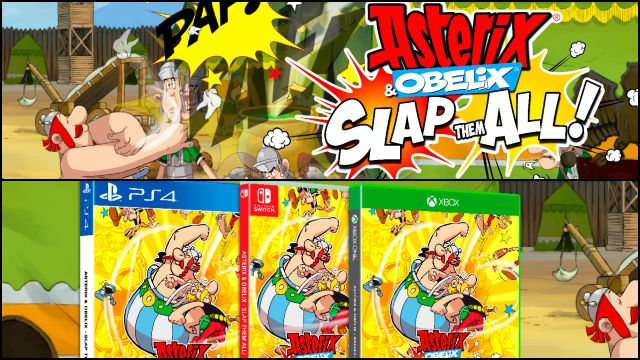 Asterix & Obelix: Slap Them All!: The Microids and Nutz Studio title will be released on PS4, Nintendo Switch, Xbox One and PC with a journey through Egypt, Gaul and Hispania in this crazy beat ’em up. Microids has confirmed the release date of Asterix & Obelix: Slap Them All !. The title developed by Nutz Studio will arrive this November 25, 2021 to PlayStation 4, Xbox One, Nintendo Switch and PC; Backward compatible with PS5 and Xbox Series, with a playable proposal based on beat ‘em up 2D with scenarios that will take us to Egypt, Hispania or Gaul.

The classic license of comics originally created by René Goscinny and Albert Uderzo will arrive on consoles with a respectful art style and animation that fans of the television series will especially like. The play seeks to amuse and turn smacking into a joy at the controls, one of the most complex tasks for any self-respecting “me against the neighborhood” video game. Those responsible for the work have promised to be faithful to the original product, something that we will have to verify from this month of November. Let us know more details confirmed on the occasion of the announcement.

Collector’s edition and translation into Spanish: By Tutatis!

Microids does not usually leave out Spanish in its list of languages ​​chosen for the localization of its video games. This time it couldn’t be less. Asterix & Obelix: Slap Them All! It will arrive translated into English, French, Italian, German and Spanish; with dubbing in English, French and German. In addition to the standard physical copy that we can find in stores – Meridiem Games will be responsible for its physical distribution for Nintendo Switch, Xbox One and PS4 – there will also be limited and collector’s editions for the most fans of the place.

This tribute to the classics will bring the magic potion to consoles on November 25. Asterix & Obelix: Slap them All! is presented as one of the most outstanding beat ‘em up of the season.

The Last of Us 3 should give players control over new...