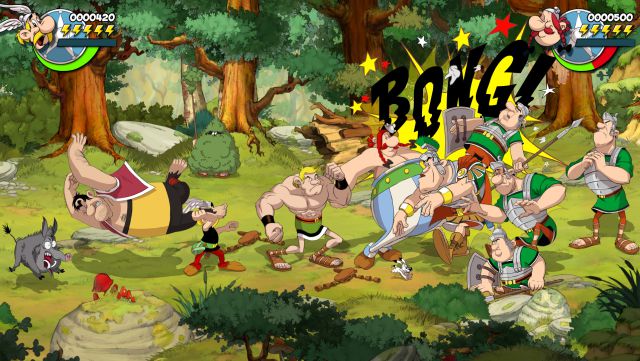 Asterix & Obelix: The most famous Gauls couple in comics stars in a new 2D beat’em up that reviews their story in the vignettes with eye-catching visuals. Asterix and Obélix, the most famous Gauls couple in comics and an icon of 20th century pop culture, once again bursts into the video game world with a striking 2D beat’em up by Mr. Nutz Studio, creators of the Toki remake, together with Microids and Meridiem Games, publishers that have just launched other titles with a marked youth character such as The Smurfs: Operation Vilhoja and Marsupilami: Hoobadventure. Now, and with the aim of transferring all the character of the original work and the animated series to the interactive format, Astérix & Obélix: Slap Them All! to PC, PS4, Xbox One and Nintendo Switch (also compatible with PS5 and Xbox Series X | S, although without improvements), a true old-fashioned brawler that moves wonderfully well thanks to a staging that will dazzle fans from the comics of the writer René Goscinny and the cartoonist Albert Uderzo and from animated films. Let’s see what this new adaptation of Asterix and Obélix has to offer in video game format.

An action-packed beat’em up … and slaps!

The Asterix the Gaul franchise, created in 1959 by René Goscinny and Albert Uderzo for the French magazine Pilote, has been marveling many generations through comics, films (animated and, more recently, live action) and even video games, with a multitude of adaptations that have always tried to capture the action and humor of the original work with better or worse luck. In the field of interactive entertainment, the brand has already accumulated almost 20 titles through almost four decades in a multitude of systems, with the well-remembered Konami arcade as the great milestone of the franchise, now coming a new adaptation in the form of a beat’em up of the old school by those responsible for the remake of the classic Toki, a title that attracts attention visually with a simple glance at its screenshots or trailers. And it is that after the launch of the last three-dimensional adventures of Asterix and Obélix these last two decades (and their respective and most recent remasters), the franchise takes a new turn towards the most classic action with a cut title “me against the neighborhood “Which takes us, of course, to a Gaul dominated by the Romans.

Asterix & Obélix: Slap Them All! offers fans an overview of some of the main episodes narrated in the original cartoons, all through a plot that will take us to different locations typical of the Asterix the Gaul comics. From Gaul itself in 50 BC. in the presence of the Roman Empire and its long-suffering soldiers to other places such as Hispania or ancient Egypt, among others. Each chapter (out of a total of 6) takes us to one of these locations with its own scenarios, enemies and final bosses despite the continuous recycling of all these elements; And it is that each one of the “worlds” will be satisfied with 4 or 5 classes of enemies, very often showing clonic characters on the screen to be beaten unceremoniously. In addition, scenarios, enemies and final bosses will be repeated throughout the adventure, thus causing a slight feeling of boredom after a few hours.

From the classic Roman soldiers to be put into orbit while they leave their sandals on the ground to stout Vikings, through barbarians, petty thieves, pirates or Iberians, among which there are up to three different types of enemies to face: those of Melee, those that will attack from a distance and those that will resort to a charge that we will not be able to counteract, the latter, the most dangerous. All this through a somewhat bland plot told by static comic-style vignettes in which we must defend the Gallic village from the invasion of the Roman Empire and that serves as a simple excuse to get fully into the action. As a curiosity, a chapter has been created expressly for this video game, although this does not save the title from an excessive repetition of situations throughout its seven or eight hours of duration. Yes, it offers a very long campaign which, unfortunately, will get even longer; even heavy.