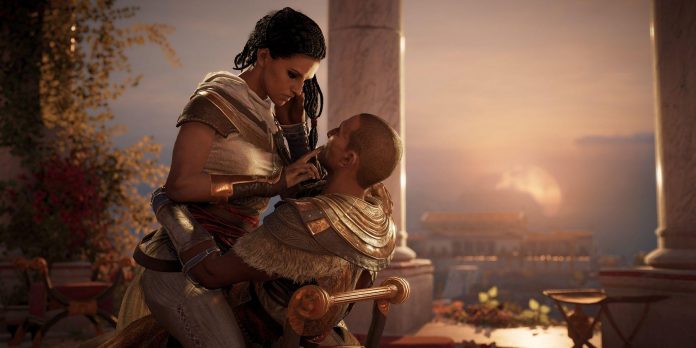 Ubisoft and the Assassin’s Creed community are currently celebrating the 15th anniversary of the franchise by reviewing past and future games. In September, Ubisoft will hold an event dedicated to the future of the franchise, and many are hoping to get news there about rumors or reports about Assassin’s Creed Rift, Infinity, Nexus and/or a remake of AC1.

It remains to be seen, but Ubisoft has outlined the future of Assassin’s Creed Valhalla pretty well. This summer, he will receive a roguelike game mode called The Forgotten Saga and the last chapter with free content until the end of this year. It seems that there is still a lot of interesting things ahead, but there is still a lot to discover. For example, one AC fan recently found a cool Easter egg for Bayek and Ai from AC Origins in Assassin’s Creed Valhalla.

RELATED: Assassin’s Creed VR will include both Indoor and Outdoor levels and multiple Biomes

As Redditor user veico_cm noted, there seems to be a reference to the scene in Bayek’s and Ai’s Bathhouse in AC Valhalla’s Lundene. Many may recall that the Hidden Blade was given to Bayek by Aya, who then used it to kill a Snake in a bathhouse in Alexandria. After that, the lovers spend an intimate night together on the roof of the building, before Bayek kills other members of the Order of the Ancients, and Aya begins her work for Cleopatra.

There is an old Roman building in Lundene that is strikingly similar to the one in which Bayek and Aya appear. There seem to be a few pillows, hay, flowers and cups here, which also resemble the scene with Bayek and Aya, but what really seals the deal is the nearest door. In this place, players can find a key, called the Key to the Lovers’ House, which opens the specified door.

I found this little hint of Bayek and Aya in Lundene from assassinskrid.

While this may be a coincidence, it looks like it’s an allusion to Bayek and Aya. Perhaps this is even more noticeable for Assassin’s Creed Valhalla players who have started playing the recently released AC Origins update at 60 frames per second for PS5 and Xbox Series X. Some gameplay of this was also shown during the recent anniversary broadcast, and it has a lot of hope for the future.

Along with the various aforementioned projects, many fans hope that this is a sign of another Assassin’s Creed crossover story between Cassandra and Aya. The crossover between Odyssey and Valhalla, when Cassandra meets Avor, has been perhaps one of the most popular materials for AC Valhalla so far, and many are hoping to see Cassandra meet Aya at some point. It is currently unknown if the recent update was the last stop for AC Origins.