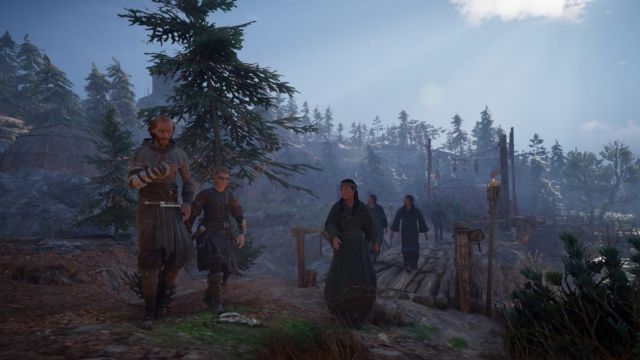 Assassin’s Creed Valhalla: The Ubisoft title takes us beyond England on one of the missions, where we meet new characters.In the 9th century AD, Eivor leads his clan to a new destination, England. The Vikings seek a permanent settlement, but in Assassin’s Creed Valhalla, Ubisoft Montreal’s most recent production, the protagonist travels to different territories, among which is Vinlandia (present-day Canada). There he meets some natives, although communication is not entirely fluent because they speak different languages. Access the Animus, one of the most popular fan sites, has collaborated with Kanien’kehá: ka Onkwawén: na Raotitióhkwa Language and Cultural Center to translate all these dialogues.

In the video, which you can see below these lines, the conversations taking place around Eivor are shown. The character cannot understand them, so Ubisoft decided not to deliberately subtitle them to make the player feel the same. You also hear a story that appeared in Assassin’s Creed Rogue, but the content is different, suggesting that each of the tribes had different versions of the same event.

It is not the first time that the saga introduces Native Americans. Since Assassin’s Creed 3, players have been able to experiment with these cultures. In fact, it is proven that the Vikings reached Vinland before other civilizations that later claimed their discovery.

Assassin’s Creed Valhalla recently received the first story expansion, which we already talked about in MeriStation. Wrath of the Druids moves Eivor to Ireland, as his cousin has become King of Dublin. The territory suffers from instability, but the crowning of a sovereign for the entire nation may allow the country to be unified. It won’t be easy, since a group of radical druids operate in the shadows.