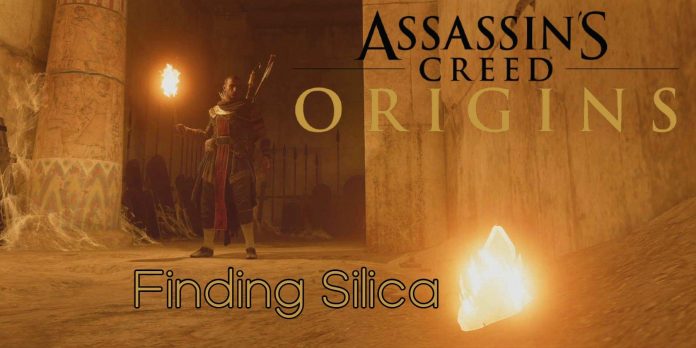 Assassin’s Creed Origins gives players a long list of collectibles to track down. From animal products to mysterious objects and ores, this variety fascinates players, but can also lead to some confusion about the roles each of them plays. This is especially true for items in Assassin’s Creed Origins that are related to the mythology of the franchise.

Silica is one such object that can be difficult to find and understand, and this is especially true for those who are just starting to play. For those Assassin’s Creed Origins players who want to track down and use these materials, this guide is here to help.

Where to find silica in Assassin’s Creed Origins?

The best way to find a significant amount of silica is to complete the tombs in Assassin’s Creed Origins, as well as the Isu vaults. Although there are also places on the map where players can collect some silica, these marked places are the best. There are more than a dozen such places where players can collect silica, and in each of them you need to collect several parts.​​​​​​

The first step for players at the beginning of the game should be the most obvious place to collect silica: Giza. As a testament to the historical authenticity of Assassin’s Creed Origins, the huge pyramids are home to the tombs of Khufu, Harfe and Menakure.

Collectively, they contain 10 silicas, which players can discover by exploring these tombs. Silica is usually placed on the ground and off the beaten path in these puzzle areas, so players need to exhaust all paths to collect all possible pieces.

What is silica used for in Assassin’s Creed Origins?

At the end of the silica hunt, players who want to get one of the best Assassin’s Creed Origin costumes will receive a big reward. Hidden under the Great Sphinx of Giza is a passage leading to a large room with maps. If players have found each of the twelve stone circles in the game and completed them, then the twelve lights will illuminate the map and open a passage to the hidden area.

This hidden area in Assassin’s Creed Origins is actually an Isu vault known as Eesfet Oon-m’aa Poo, and there is a stone pillar in the center of the room. At this column, players can exchange 50 pieces of silica for a set of Isu armor. Although this outfit does not give players any special abilities, it is one of the most interesting options in the game.

Assassin’s Creed Origins is already available for PC, PS4 and Xbox One.

eFootball PES Follows In The Footsteps Of FIFA 22 And Eliminates...