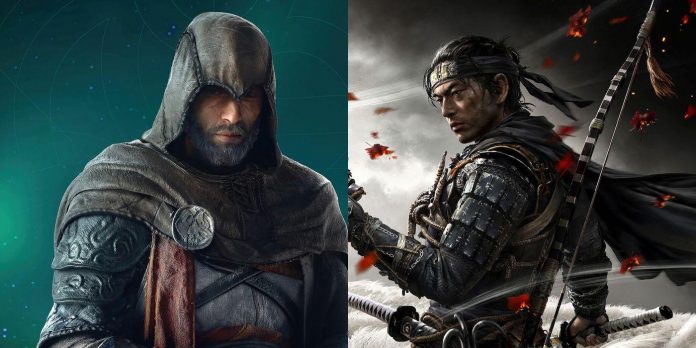 Fans have long awaited an Assassin’s Creed title set in Feudal Japan, though some believe that such a project would be a mere reskin of Ghost of Tsushima. Ubisoft’s long-running Assassin’s Creed series has brought players to many different time periods, but the series is yet to step foot into the history of Japan. Sucker Punch Productions’ Ghost of Tsushima, meanwhile, serves as an action-packed love letter to Japanese history and samurai cinema. While the setting has already been adapted into a video game, Assassin’s Creed can still visit Feudal Japan without retreading old ground.

Since its first installment back in 2007, the Assassin’s Creed franchise has recreated numerous historical settings. The open-world titles have let players immerse themselves in the Third Crusade, the Italian Renaissance, the American Revolution, Ancient Egypt, the Viking Age and more. Each installment attempts to reflect the major events and culture of its chosen time period while still maintaining the franchise’s core pillars of melee combat, stealth and freerunning traversal. The future of the Assassin’s Creed series is currently uncertain, though rumors suggest that the upcoming Assassin’s Creed Infinity will be a live-service title with multiple different settings. Rumors also suggest that an Assassin’s Creed game in Japan is on the horizon, though many believe that Ghost of Tsushima has already filled that niche.

Released in 2020, Sucker Punch Productions’ Ghost of Tsushima draws inspiration from both samurai films and real Japanese history. Set in 1274, the game is centered around a Mongol invasion of Tsushima Island that leaves samurai warrior Jin Sakai critically wounded. As the nephew of Tsushima’s Lord Shimura, Jin must regain his strength and adopt increasingly underhanded ninja tactics to fight back against Khotun Khan and his army. Ghost of Tsushima lets players sneak, slash and scavenge across a gorgeously detailed recreation of a Feudal Japanese island. The title emphasizes fast-paced katana combat, though various ninja tools and samurai techniques add depth to every battle. While Ghost of Tsushima recreates Feudal Japan with great accuracy, an Assassin’s Creed game using the setting could easily set itself apart from Sucker Punch’s historical epic.

Assassin’s Creed Gameplay Is Different From Ghost of Tsushima

Ghost of Tsushima shares an open-world format with the Assassin’s Creed series, but otherwise the two properties are actually very different. Ghost of Tsushima focuses mainly on horseback exploration, with climbing segments kept to a minimum despite the presence of a rudimentary grappling hook. Jin Sakai exclusively wields a katana in battle, assuming different stances to counter different opponents’ weapons, with a double-edged tanto knife being used for stealth kills. Stealth mechanics in Ghost of Tsushima let Jin strike from the shadows or use a bow for silent ranged kills, with various gadgets helping him sneak around.

Related: Ghost of Tsushima Shows the Need For an Assassin’s Creed in Japan

While Ghost of Tsushima explored a very fascinating part of Japanese history, the country’s feudal period lasted for hundreds of years. The Kamakura period, which followed the rise of Minamoto no Yoritomo in 1192, established the shogun and the samurai as the rulers of Japan. The Mongolian invasion depicted in Ghost of Tsushima, which eventually failed due to Japanese warriors and two devastating typhoons, occurred within this period. The subsequent Marumachi period saw samurai descendant Ashikaga Takauji appoint Emperor Komyo as Japan’s leader, which led to a long period of infighting. Finally, the Azuchi–Momoyama period saw Feudal Japan ruled by two powerful warlords, Oda Nobunaga and Toyotomi Hideyoshi, who reigned until the peaceful Emo period.

Related: Ghost Of Tsushima’s Combat Is Perfect For An Avatar: TLA Game

An Assassin’s Creed game set in Feudal Japan can avoid becoming a reskin of Ghost of Tsushima by exploring any of the era’s other exciting events. Japan is made up of 6,852 islands, so finding a suitable location other than Tsushima would be very easy. Kamakura served as the country’s capital for much of the feudal period, making it a perfect choice for a new Assassin’s Creed setting. Rather than dealing with a Mongol invasion, as Ghost of Tsushima did, an Assassin’s Creed game could instead focus on inner conflict between Japan’s various rulers and factions. This would lend itself to stealthy assassinations and political intrigue instead of large-scale battles against invading armies.

While Ghost of Tsushima faithfully recreates the Mongol invasion of Tsushima, the game does not include real historical figures. Jin Sakai and Lord Shimura are entirely fictional, with Tsushima’s samurai instead being led by a man named So Sukekuni in real life. The Mongolian leader Khotun Khan, meant to be a grandson of the legendary Genghis Khan, is also a fictional character. The Mongol Army was actually led by Kublai Khan, who was a true grandson of Genghis. So, while Ghost of Tsushima strives to recreate Japanese history, it substitutes real figures with fictional characters.

Final Fantasy XVI, The Most Anticipated Game in Japan; This is...