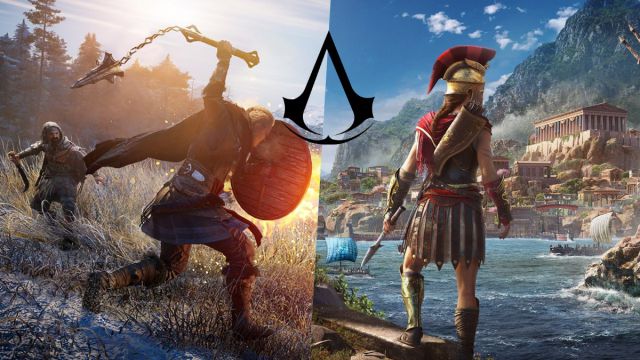 Assassin’s Creed Infinity: The French company confirms that they will work collaboratively with their Montreal and Quebec studios. A few hours before Ubisoft made it official, journalist Jason Schreier announced that Assassin’s Creed Infinity is the developer’s new project, a live service that will function as a platform on which the content will be integrated. Although a representative of the company had already credited the existence of the project, the French have published a statement in which they roughly detail the future of the assassins saga.

It is confirmed that Ubisoft’s intention is to build an ecosystem in which to integrate future content, instead of launching individual deliveries as they have done to date. The statement, signed by Nathalie Bouchard and Christophe Derennes (both managing directors), emphasizes the commercial success of Assassin’s Creed Odyssey and Valhalla, but acknowledges that they are at a point where they must make decisions about the saga that will have an impact “on the future ”, in the years to come.

“Rather than continue to pass the baton from game to game, we think this is the opportunity for one of Ubisoft’s most beloved franchises to evolve and collaboratively integrate.” They think that instead of being focused on studies, it is better that they focus their attention “on talent and leadership”, regardless of where they are within Ubisoft. Most importantly, Assassin’s Creed has always been developed by multicultural teams with different contexts and perspectives that have influenced the description of their characters, locations, and cultures. Although we know that there is always room for improvement, we believe that this structure will allow us to ensure diversity and representation within our studios, while continuing to grow ”.

To make this vision a reality, they will work in a collaborative cross-studio environment, which will be led by Ubisoft Montreal and Ubisoft Quebec. They will be in charge of “growing, evolving and defining the future of Assassin’s Creed”, which includes the development of the Infinity project, which they say is still very early in its creative process.

This collaborative environment will be led by Marc-Alexis Côté, who will become executive producer of the franchise from now on. “Côté will join Étienne Allonier’s team at Ubisoft Montreal,” who has been a brand director for Assassin’s Creed for the past 10 years. His role will be to ensure that each of the products continues to live up to the expectations of fans, who have called for “a more cohesive approach” from a development standpoint, over many years.

Julien Laferriére will be the new senior producer and will oversee production at both studios. In addition, they will use creative leaders from the two studios: Jonathan Dumont and Clint Hocking will share leadership as creative directors. “This change means that we are going to evolve along with the entire video game industry. The pandemic and telecommuting have fundamentally changed the way games are produced, giving us a moment to reflect on our organization. ” The statement recalls that Assassin’s Creed was born from the hand of Ubisoft Montreal, the team that laid the foundations. However, other developers such as Ubisoft Quebec have been able to contribute their bit.

Ubisoft will share more information about it soon, although it has not given any date.

Saints Row: See Gameplay From The First Reboot Missions In The...