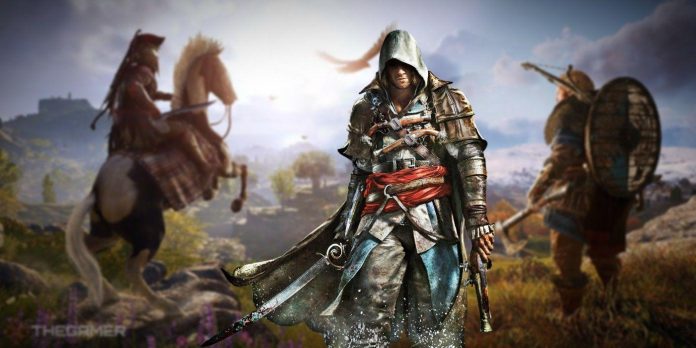 The news about Assassin’s Creed Infinity is more of an omen than a gift, and it seems more of a threat to many fans. Although the game’s release is still a long way off, a Bloomberg report says that AC Infinity will be a live-service game and could potentially become a hub for even more future Assassin’s Creed releases. As Ubisoft plans more games after the next sequel, AC Infinity shows how Assassin’s Creed works indefinitely, expanding the series with an absurd number of entries.

Ubisoft’s hit series began in 2007 with the simple but ambitious Assassin’s Creed, centered on Desmond Miles and his ancestor Altair. Desmond’s story developed over the next four parts as he explored the lives of his other ancestors. But when in Assassin’s Creed 3 (which was actually the fourth installment) Desmond’s storyline ended, the series began to turn left after left turn. Assassin’s Creed 4: Black Flag was a pirate game in which the assassin themes were pushed aside; two games later, Assassin’s Creed Syndicate abandoned historical realism in favor of style and allowed players to use high-tech gadgets in the steampunk style; Assassin’s Creed Origins and Valhalla finally brought the series to its current state, in which the games are now huge role-playing games that require significant time to complete the main characters who can develop god-like power.

While people may debate whether these changes were good or bad for Assassin’s Creed, two things are undeniable: assassination missions have become repetitive, and new content is being used to encourage expensive microtransactions. AC Infinity is likely to continue this trend, especially when it comes to microtransactions. A Bloomberg report confirmed that AC Infinity will not be a free game, and as a live-service game that is projected to serve as a hub for future sequels, its entire model is based on getting players to buy DLC, cosmetic items and more. Since Assassin’s Creed relies so heavily on this new direction of microtransactions in addition to gameplay, perhaps it’s time for fans to admit that the Ubisoft series has been delayed.

AC Infinity may have problematic microtransactions and unfulfilled wishes

To understand how bad microtransactions can be in AC Infinity, just look at AC Valhalla. To get all the DLC and in-game items, players have to spend a shocking $705. The only way to reduce this outrageous price is to subscribe to Ubisoft, which can siphon more money from fans’ wallets than they could otherwise spend if the benefits of the subscription plan are not fully used. Even if the player only needs DLC for AC Valhalla, Dawn of Ragnarok alone can cost him $39.99. Since AC Valhalla will be provided in real time and may become a hub for future games, the subscription plan is likely to be an integral part of its operation, and not just an opportunity to lower DLC prices. In addition, cosmetic items and weapons with price tags are almost guaranteed, given the success of AC Valhalla.

On top of that, AC Infinity and future games may appear in the series too late to fulfill the wishes of fans. Ever since the series came out, fans have always wanted the Assassin’s Creed game to take place in Japan. Although there are rumors that AC Infinity may finally bring the killers to Japan, Ubisoft ultimately brought too little and too late. Three games were held in Italy, two in England and two in the Middle East and North Africa: why is the series coming to Japan only now, despite the fact that the country is ideal for the game and is in great demand among fans of the series?

Due to the problems with microtransactions and gameplay of the AC Infinity series, it seems like a threat that promises something similar. Even if Ubisoft manages to make another big change in the style of games, as was the case with AC Origins, the core of the series is likely to always remain killer missions, and at some point no DLC or cosmetic items will disappear. going to make the continuation of the series worth it.