Home Entertainment Arsenal – Liverpool 3:2: the Reds are paying for weakness in defense 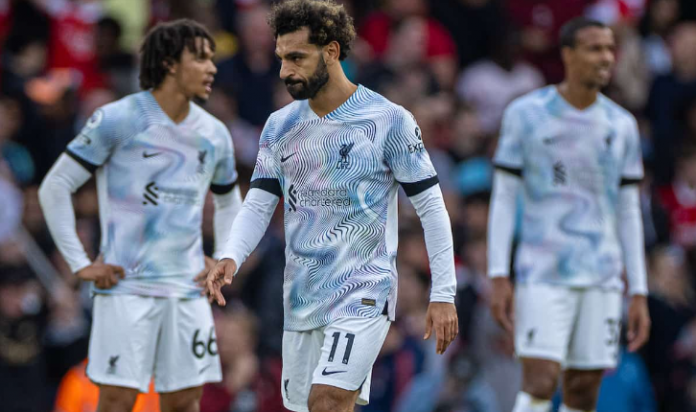 The fragility of Liverpool’s defense was again evident in the game with Arsenal, who inflicted their second league defeat of the season, with a 3-2 defeat, as a result of which the Reds remained on a modest 10 points.

After the change of alignment gave a positive result in the middle of the week, Jurgen Klopp stuck to the formula against Arsenal in good shape, but in the capital it was not so successful.

However, after just 57 seconds, the ball ended up in Alisson’s goal, as the Reds continued to miss first, and Gabriel Martinelli finished after just four Arsenal passes.

These are 10 of the last 12 league games in which Liverpool conceded first.

The pressure was on Klopp’s side, with the threat of being exposed on the counterattack as the flanks remained open to Arsenal’s forwards and midfield.

But the lion’s share of possession soon went to Liverpool to help them get back on their feet in the fight, calm their nerves, create chances and turn into a side asking questions.

Darwin Nunez soon capitalized, latching onto Luis Diaz’s pass through the penalty area with a neat sliding finish as the Reds played behind the Gunners’ defense with the score 1-1.

Diaz’s knee injury forced him to leave shortly before half-time, Roberto Firmino replaced him, and at a time when Liverpool had to keep track of time and maintain discipline, they allowed Arsenal to punch them with a free kick in attack.

Bukayo Saka converted at the back post in the last seconds of the half, but the Reds had no chance to stop the game in its infancy. From disappointment to hope and back again.

Missed the first in 10 of the last 12 matches of the championship.
Nunez’s first goal since the opening day; Firmino takes 10th place in the match against the Gunners
Diaz dropped out in the first half due to a knee injury

The second half began with Joe Gomez replacing Trent Alexander-Arnold, who had twisted his ankle earlier in the game, bringing the list of losses to two in 45 minutes.

At the end of the first half, the Arsenal team in control of the situation was hit by a Liverpool counterattack, and Firmino finished the game with aplomb after a delightful pass from Diogo Hota to equalize the score.

However, Klopp’s team continued to approach the danger line from behind, and Klopp turned to Ibrahima Konata and Fabinho to force Henderson to shift to the right of midfield.

Just seven minutes after a chaotic defense in the penalty area, Saka converted a penalty after Michael Oliver landed a soft penalty, no doubt thanks to the acting skills of Gabriel Jesus, but he was not helped by the inability to clear the lines.

As a result, Arsenal returns to the top of the table, while Liverpool holds a modest 10 points after eight games.

There is not much time left to wait for the next match, as we are waiting for a trip to Rangers on Wednesday evening.