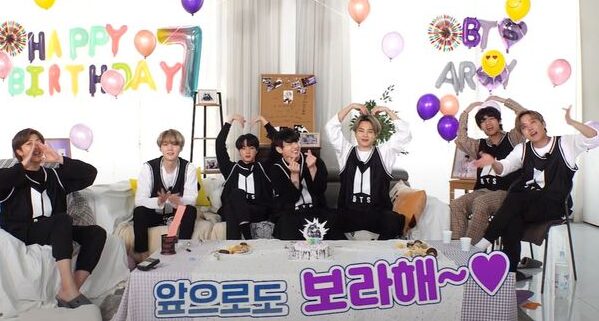 ARMY celebrates BTS’s seventh anniversary with loving messages. The BTS fandom has expressed what they represent in their lives; ARMY seized the main trends in social networks.

It’s been 7 years since that June 13 when seven teenagers, full of dreams and fears at the same time, debuted as BTS, an abbreviation of Bangtan Sonyeondan that means “Bulletproof Boy Scouts”: RM, Jin, Suga, J- Hope, Jimin, V, and Jungkook.

On the occasion of BTS’s 7th anniversary , ARMY has expressed on social media what Idols represent in their lives and how their music has helped them through difficult times. “Seven years ago, seven amazing, talented, generous, kind and loving people came into our lives, today we celebrate their anniversary and we thank them for all they have given us, let’s spend many more years together,” they wrote on the ARMY fan account. Peru. A boy band fan expressed:

“I remember when Hoseok said, ‘BTS is the best decision you’ve ever made’ and the truth is right, I wouldn’t change these guys for anything.”

The first of the BTS members to share a message to the fandom on their 7th anniversary was Jin:

“ARMY, happy seventh anniversary. It is thanks to ARMY that we have been having fun while working for a long time!”

ARMY has shown its love for the group by trending many hashtags around the world on Twitter:

BTS leader RM said on Twitter: ” Bangtan and ARMY are finally celebrating their seventh anniversary, I love them.”

For his part, Suga shared a video of the group singing and dancing “Path”, a song hidden in the debut single “2 Cool 4 Skool”.

As part of the BTS Festa 2020, the Idols shared a video of the celebration they held: