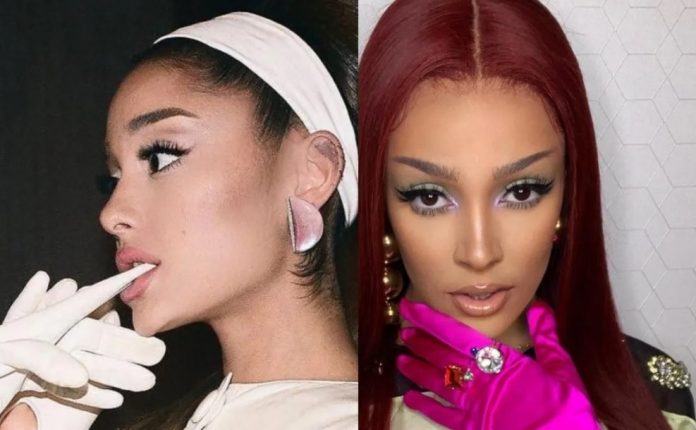 Both stars collaborated on a song for Ariana Grande’s record material, are they preparing something for the Doja Cat CD?

Ariana Grande and Doja Cat worked on the song ‘Motive’, included on the album ‘Positions’, the duo raised suspicions of a new collaboration together. We tell you all the details below.

The American singer-songwriter had a period of creativity during social isolation and on October 22, 2020, she released the studio album ‘ Positions’ , Ariana Grande collaborated with different artists such as Doja Cat .

Ariana Grande and the ‘Say So’ rapper teamed up to perform ‘Motive’, a song that addressed the topic of sensuality and emotion that exists between two people who feel a great attraction. The song was very successful and exceeded 12 million views on YouTube.

Fans of both stars stirred up the Internet as Doja Cat could have given us a clue about a new musical work with Ariana Grande . Will they share a track again? Read on for all the details.

A few hours ago, Doja Cat stopped following several people on the Twitter platform, shortly after she published a message in which she commented that only 6 people had her follow for a powerful reason.

Following them for a reason;) Guess why

Fans saw that among the people were Hood Pope, Young Thug, The Weeknd, French Montana and Ariana Grande, which immediately raised the rumors of a collaboration on Doja’s upcoming album called ‘Planet Her’.

Following them for a reeeeaaaaasssoooonnn 😉 Guess why.

The post of the interpreter of ‘Like That’ quickly reached 25 thousand likes, a thousand retweets and thousands of interactions from Internet users for the star’s new project with Ariana Grande . What do you think of the collaboration between them?

Are you admired of the talent of the singer Ariana Grande ? We invite you to know her story before her international fame.