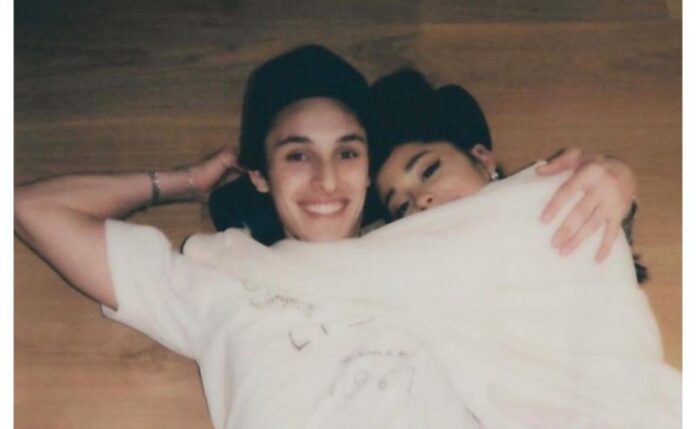 Ariana Grande uploaded some mysterious images to her social networks with a large diamond and pearl ring, the singer’s fans began to speculate about her engagement with Dalton Gomez, her current partner.

The American singer found love again in Dalton Gomez, she was inspired by her relationship to write some songs for her latest album Positions, her courtship is better than ever. After almost 9 months of relationship, will they get married?

Through Instagram, Ariana Grande published a series of photographs that set off the alarms of her fans, the interpreter of ‘7 Rings’ appeared lying on the floor with her current partner. Owww!

In other images, the singer showed her hand and wore a huge diamond and pearl ring, the stones belonged to one of Ariana Grande’s grandfather’s ties, the star’s grandmother mentioned that he would protect her from her. This accessory unleashed the wedding bell sounds between her and her groom.

DOES ARIANA GRANDE RECEIVE CONGRATULATIONS ON YOUR ENGAGEMENT from her?

Scooter Braun, Ariana Grande’s manager, congratulated the actress and Dalton with a special message in the app’s comment box, wishing them both well and expressing his love for the couple, which could confirm the news of the singer’s wedding.

Other stars joined in the congratulations like Kim Kardashian, Demi Lovato and Hailey Bieber. Even a friend of the singer uploaded a story on Instagram with the recent photos of Ariana Grande’s ring, which further unleashed the curiosity of netizens.

Photography quickly accumulated more than 4 million likes and became a trending topic on different Internet platforms. So far it has not been confirmed, they are speculations, but the fans are happy for her supposed commitment.

Learn about the history of Ariana Grande before international fame, how was she with her family and in her daily life?