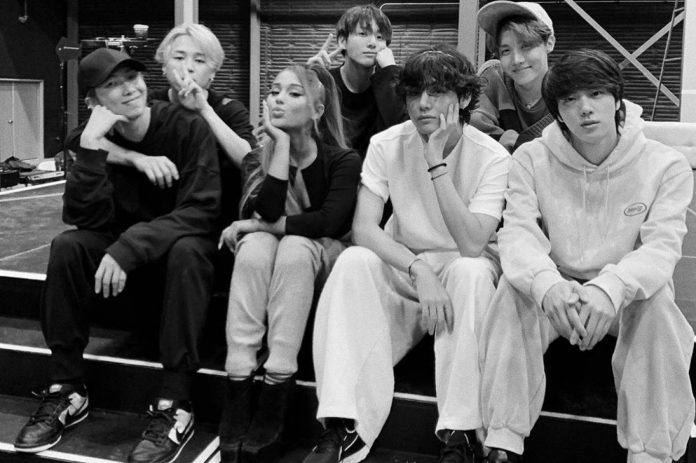 In addition to their first interactions, popularity, and common records, the K-pop group could be close to Ariana Grande thanks to this project.

Could BTS and Ariana Grande collaborate soon? Following their interaction at the 2020 GRAMMYs, ARMY has long waited for a collaboration between them and a BigHit deal rekindled hopes.

This 2021, the star of “7 Rings” prepares great releases in his musical and acting career, revealed the premiere of “Positions Deluxe”, which will include some collaborations, will also act in the movie “Don’t Look Up” and launched a new perfume, but are there any plans for her to dabble in K-pop?

The Florida native is no stranger to K-pop, Ariana Grande produced BLACKPINK and Selena Gomez’s “Ice Cream”, she also has a photo with BTS and Jungkook,She even became the most followed artist on Spotify after the platform’s premiere in South Korea. Hope for a project in the future arose after an agreement between BigHit and Universal Music Group.

The popularity of the singer is worldwide, not unlike that of Bangtan , the Korean pop genre has spread internationally on a large scale in recent years, so agencies and record companies seek to create the best experience for fans. with alliances that seek the best for their artists.

ARIANA GRANDE IS CLOSER TO THE KPOP

According to Korean media reports and BigHit, a statement reported that the K-pop agency invested in a joint project with Universal Music Group , the label that manages Ariana Grande’s career .

ARMY has always made requests for collaboration and the singer already dabbled in K-pop last year. The agreement explains that UMG and BigHit will invest in KBYK in order to create the Venewlive platform, which will offer a new concert experience and high-quality content.

The CEO of Universal, Boyd Muir said that pleases them closer ties withBigHit, which raised expectations for a collaboration between BTS and Ariana Grande, who has big projects in store for this year and 2022. Both have reached the top of # 1 on Billboard, so a musical fusion would be ideal for both. and a dream come true for his fans.

Ariana Grande had the opportunity to meet them, even externally, her love and gratitude to Jungkook for attending one of her concerts, so the friendship and work relationship has united them, only the musical side is missing.

In addition to the rumors and possible opportunities in music, Ariana Grande is ready to conquer the industry in 2021 and 2022, know all her future projects.