Home Entertainment Arctic Monkeys on the “Car”: “It took us a lot longer to... 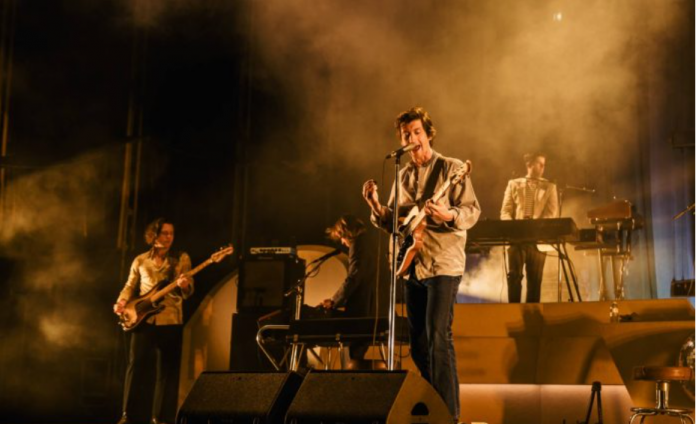 Arctic Monkeys talked about their upcoming seventh studio album “The Car”, detailing the process and inspiration of one of its tracks — see below.

Ahead of the band’s performance at Studio Brussel on October 10, Alex Turner and Matt Helders gave an interview to Vera Simons from 3FM. Talking to them about the new album, she asked: “You remember the moment when you felt it click, it was completed. Is the whole recording finished, ready, is it perfect?”

“It took us a lot longer to get to the end point of this than any other,” Turner replied. “I guess because we had a little more time. Helders added, “He was probably more dispersed as well.”

Turner continued, “Maybe the longer you let this go on, the more you want to allow yourself to make adjustments. Maybe it could all get a little silly in the end in that regard.… What’s remarkable is that I don’t know if I’ve ever listened to it in the car.”

Discussing the penultimate track of the album “Mr. Schwartz”, Simons wondered if he refers to the American poet Delmore Schwartz.

“No, it’s just a coincidence,” Turner said. “Another Schwartz, a certain Mrs. Schwartz, appeared on my barometer the other day. There is a story by George Saunders called “Unloading for Mrs. Schwartz,” and I do not know, maybe subconsciously it came from there.”

He continued: “But I don’t think so either. I saw the name on the back of the Alfa Romeo, under the taillight in… I would like to know the font name, but I don’t. But I would describe it as the 90s, surfy, and on the back was written “Del Schwartz”. So we had a song with that name, but it wasn’t included in the album. And that led to Mr. Schwartz.”

The interviewer then asked the band about the existence of a secret Spotify playlist called “Del Schwartz” that fans had noticed before the song titles were released and it was assumed that they belonged to Turner. When asked to confirm or deny, both Turner and Helders seemed to deny that it belonged to them.

“Unless it was his Alfa Romeo, it never occurred to me,” Turner added. — But here we will have to use some kind of time travel.

Yesterday (October 10), the band added European headliners to their 2023 world tour. “The Car” will be released next week (October 21), and they have already confirmed details of a UK stadium tour and concerts in North America with Fontaines D.C. next year.

In late April and early May 2023, the band will play several concerts on the continent, in Germany, Norway, Sweden, France and other countries. Tickets will go on sale at 10:00 Central European time on Friday, October 14, and you can buy them here.

Steve Martin gave a funny answer when asked How long he...