A 3600-year-old mummy was discovered in excavations by a Spanish and Egyptian archaeological team in Egypt. Various jewelery and a pair of sandals were found on the mummy, which was determined to belong to a 15-year-old girl.

In the necropolis of Dra Abul Naga in Luxor, Egypt, a 3,600-year-old mummy was found in a wooden sarcophagus, descended from the 17th pharaoh dynasty (between 1635-1550 BC). The sarcophagus also reportedly included a small coffin with burial equipment.

José Galán, a member of a team of Spanish and Egyptian archaeologists who found the mummy, said the sarcophagus was carved from a single plane tree, covered with whitewash and painted in red. The mummy in the sarcophagus was reported to belong to a 15-year-old girl. 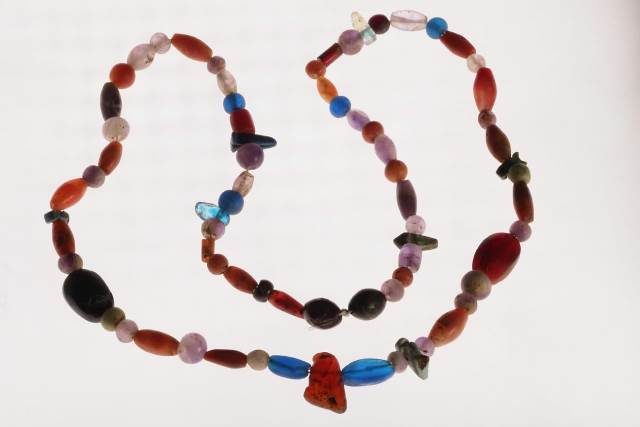 Jewelery and sandals found alongside 3600 years old mummy
The poorly preserved mummy of the 15-year-old girl was lying sideways inside the coffin. In one ear of the mummy there were two metal-covered spiral shaped earrings. He also wore two rings, one made of bone and the other made of metal, rope and blue glass beads.

There were four necklaces on the neck of the mummy. One of the necklaces had a length of 70 cm, round and light blue changing tile beads. Another is 62 cm long and made of green tiles and glass beads. The most beautiful one, as you can see above, was made of amethyst, agate, amber, blue glass and quartz beads. The fourth necklace consisted of a combination of several wires and tile beads.

The small coffin made of mud had a wooden figurine wrapped in four linen bandages. Galán and his team found a pair of leather sandals, painted red in a well next to the tomb with the mummy, and decorated with the god Bes, the goddess Taweret, a pair of cats, a mountain goat and a rosette. Galán stated that even though the sandals are 3,600 years old, they are well protected and worn by a woman, regardless of size.