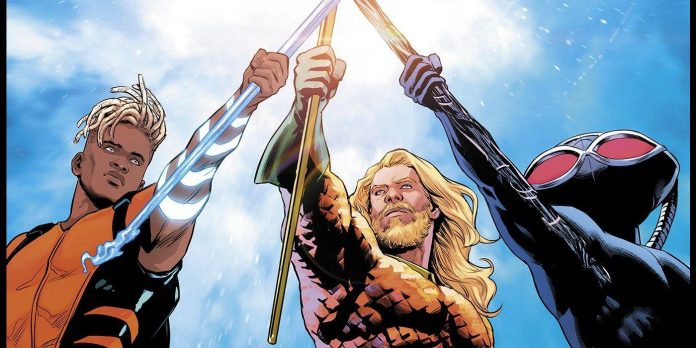 Attention: there are spoilers ahead for Aquaman No. 5!

Arthur Curry, better known as Aquaman, may be the arch-rival of his nemesis Black Manta, but when circumstances force the couple to work together, their partnership allows them to completely master the entire ocean. Not only is their physical and military prowess second to none, but there is no place on Earth between Arthur of Atlantis’ command and Black Manta’s personal army that they cannot reach. Although they may be enemies, their rivalry means that each of them is familiar with all the capabilities of the other, and therefore they can act as an ideal team.

It takes an extraordinary combination of circumstances to push such enemies together, but both Aquaman and Black Manta face a challenge that threatens to destroy everything they hold dear and has pushed one of DC’s most infamous villains to become a hero. When the combination of the Ocean Master and the Scavenger activates dozens of sleeping agents of Atlantis around the world, it jeopardizes the fragile diplomatic state between Atlantis and the surface. Worse, the Scavenger is deliberately targeting Jackson Hyde during these attacks, and Black Manta will not allow an attack on his son.

Although it is difficult for Aquaman and Black Manta to work together, the partnership between them reaches its climax in “Aquaman No. 5” by Sami Basri, Brandon Thomas and Chuck Brown. While Aquaman leads Black Manta’s forces around the world to repair the damage caused by sleeper rogue agents, Black Manta himself is tasked with tracking down the Scavenger and dealing with him. Black Manta confirms the location of the villain, but when the battle with the Scavenger becomes unsuccessful, Arthur appears at the very last moment. In a brilliant tag team, Aquaman launches one of Manta’s jet skis directly at the Scavenger, and Manta quickly remotely blows up the vehicle to end the battle.

Because these two have fought for so long and worked so hard to thwart each other, each of them understands the other’s capabilities almost perfectly. This means that when Aquaman and Black Manta really have a common goal, they can work in perfect sync with each other. Aquaman’s mastery of the ocean combined with a first-class Black Manta squad means that a team of highly skilled water professionals can cross the world in a matter of minutes, for example, when Aquaman, hoping to earn the respect of the surface world during this attack, leads a team from a downed ship. plane crash in the ocean with a flooded subway in New York. When the two of them fight the Scavenger together, Aquaman and Black Manta barely need to say a word to each other to move in perfect tandem, beating the villain they each fought separately.

Both Black Manta and Aquaman have a ruthless core in the center — each of them is ready to do everything possible and make any sacrifices to do their job. It took a global threat to make them look each other in the eye, but when Aquaman does the impossible and teams up with Black Manta, it’s hard to imagine anything that will ever again pose a real danger to the oceans. Aquaman’s greatest partner has always been Black Manta Ray–it just took an eternal rivalry before they could finally admit it.