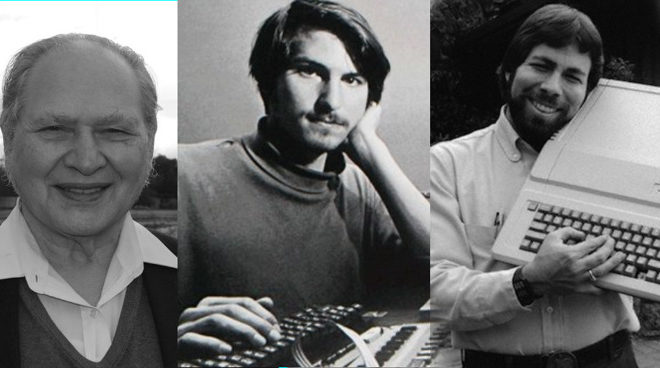 Apart from Steve Jobs and Steve Wozniak, Apple, a true tech giant, had a third known little founder: Ronald Wayne. In this article, we tell the story of Ronald Wayne, who had the opportunity to become one of the richest people in the world for 2 thousand 300 dollars.

Apple, the most criticized yet appreciated technology company in the world, is celebrating its 44th anniversary today. Apple’s first product was Apple I, which was founded on April 1, 1976 by Steve Jobs, one of the leading figures in technology history, and Steve Wozniak, his number one companion in his epic career. So that’s the story that most people know. But the truth is that Apple was founded by three people, not two: Steve Jobs, Steve Wozniak and Ronald Wayne.

Ronald Wayne, a foreign name for many, is actually the third founder of Apple. Wayne, a former electronics employee, was friends with Steve Jobs and was the first person Jobs said he planned to start a company with. Despite 45 percent of Jobs and Wozniak’s shares, Wayne, a co-founder with only 10 percent of shares, did not interfere with the company’s management or decisions, he was only interested in sales and marketing.

Ronald Wayne thought Apple would not be able to survive after the first orders, even though he supported Jobs and Wozniak in the organization.
Apple signed a company called Byte Shop immediately after its establishment, but had to borrow $ 15,000 (equivalent to about $ 70,000 today) to meet the company’s demands.

Thinking that Apple could not handle this debt, Wayne was worried that Jobs and Wozniak had no property, but that his property would be seized in a possible lien because it was his home and car.

Ronald Wayne pushed the opportunity to become one of the richest people in the world by hand
Ronald Wayne, who currently has a fortune of approximately 300 thousand dollars, has no Apple products in his home.

Unable to believe that Apple would be successful, Ronald Wayne thought it would be the best decision to leave the company and sold his shares in the company for $ 800. Wayne, who later bought an additional $ 500 to avoid claiming any rights on Apple, gave up Apple’s $ 10,500 share (about $ 10,500 in today’s money).

Ronald Wayne thought it was a “successful trade” to sell Apple’s 10 percent stake for $ 2,300 that day. However, in the future, Apple misleaded Wayne. Fitting many products that changed the technology world in its 44-year business life, Apple has a market value of $ 1.11 trillion today. The value of 10 percent Apple shares, which Ronald Wayne gave up for $ 2300, is $ 111 billion.

We can explain what kind of wealth Miss Ronald Wayne missed; The current wealth of Jeff Bezos, the richest person in the world, is about $ 130 billion.

The new Firefox on Android looks like: App redesign

Kendall Jenner: All About Her Best Friend, Fai Khadra!