With the first benchmarks released, the Apple M1 impressed by being able to match AMD’s recently launched Ryzen 5000 in single-core, while presenting performance similar to that of an Intel Core i7 9700K in multi-core. Apple’s first desktop processor also left behind the 16-inch MacBook Pro, Apple’s most powerful laptop, reaching numbers around 500 points higher. 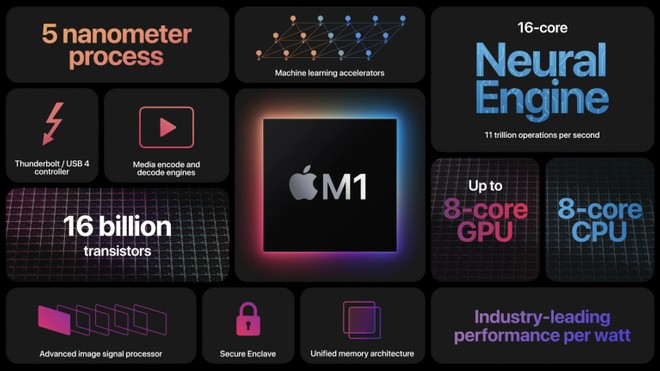 Now, in a new result found by the Tom’s Hardware website, the Apple M1 GPU is superior to the Nvidia GeForce GTX 1050 Ti and AMD Radeon RX 560, both in their desktop models, with 75W consumption. The tests were carried out on GFXBench 5.0 with Apple’s Metal API, and are aimed at mobile devices, but still impress.

In technical terms, the Apple M1 has 2.6 TFLOPs of computational power, while the GTX 1050 Ti offers 2.1 TFLOPs and the RX 560 presents numbers close to the Cupertino giant’s chip, also with 2.6 TFLOPs. The benchmarks, however, show a clear advantage for Apple.

In the Aztec Ruins Normal Tier test, the RX 560 reached 146.2 FPS, while the GTX 1050 Ti reached 159 FPS, with the Apple GPU taking the lead handily, scoring 203.6 FPS. This scenario is repeated in almost all other tests, with some of the results coming very close to the 50% advantage for the Cupertino giant.

As we know, benchmarks do not always represent realistic scenarios, but the figures presented are quite impressive, especially when we consider that the Apple graphics chip is integrated, with access to much less energy than the tested rivals. Anyway, there is little left for the M1 to be put to more accurate tests, since the first Macs with Apple Silicon start to reach consumers this week.

How was the Details on Spider-Man’s Body Designed in Marvel’s Spider-Man?

Who stopped following you on Instagram with this trick

Pfizer vaccine: requesting emergency leave in the US