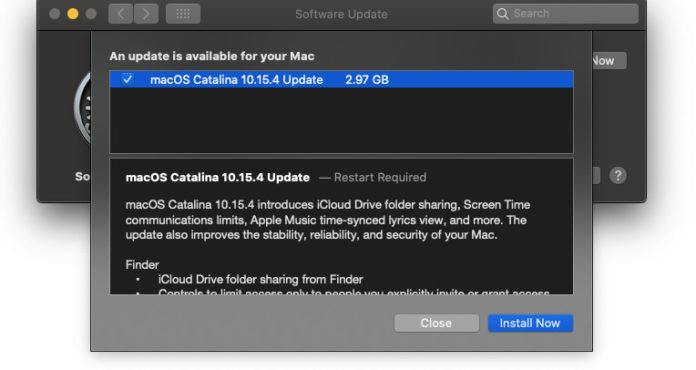 Apple has released the macOS Catalina 10.15.4 update, which has been in beta testing for some time. One of the most remarkable features in the update with bug fixes, improvements, and new features has been syncing lyrics over time.

Apple’s new version, besides all that, makes Macs more stable and safer. Let’s take a look at the innovations together.

All the innovations that came with macOS Catalina 10.15.4:

ICloud Drive file sharing via Finder.
Controls that allow only the people or anyone you specify to access your files.

Permissions that allow you to set who can make changes to files, who can upload files, and who can only view and download files.
Screen Time innovations:

Communication limits that allow you to control who your child can communicate with.
Control of music videos for your child.
Music innovations:

Clicking on the part you want in the lyrics of the song and the lyrics that are synchronized over time in Apple Music, listening to that part.
Safari innovations:

An option that allows you to transfer your passwords in Chrome to iCloud and autofill the password on your Apple devices.

Control to close all tabs to the right of the selected tab and open one more from the same tab.

Possibility to play Netflix content in HDR on compatible computers.

Ability to control the mouse cursor with head movements.
Bug fixes and other improvements:

High Dynamic Range Output to HDR10 compatible third party displays and TVs.
OAuth authentication support.
Support for CalDav migration.
Fixed the error that the copied text was not visible when dark mode was active.
Fixed an issue with CAPTCHA verification in Safari.
Fixed the issue where reminders would resend completed reminders.
Fixing an issue with the LG UltraFine 5K screen after waking up from sleep.

PUBG will run at 60fps on Xbox Series X and PS5

Pluto TV in Spain: how it works and why it’s free

What is Ocean Protocol (OCEAN) that Earns 30 Percent?

The most bored tech in the New York Times

20 cryptocurrencies with the worst FCAS score

This animated mask expresses your emotions

The thriller Twin Mirror, from the creators of Life is Strange

Ghost of Tsushima will get a big update!