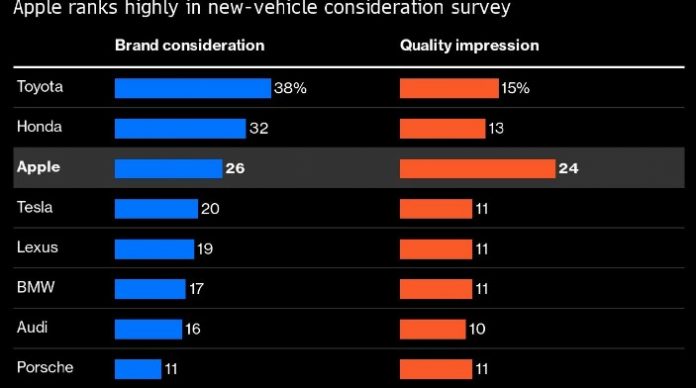 As a result of the survey, an Apple car that was very much awaited, but it is unknown whether it will be released at all, was included in the Apple Car. 26% of respondents said they love Apple and would definitely consider buying it if it produces cars.

News about the self-driving car project, which Apple has been working on for years, continues to arrive. One of the most striking statements about the car, which excited Apple fans, came in recent months from a well-known Apple analyst Kuo. Kuo said on Twitter that the Apple Car project has been discontinued.

According to various sources, Apple has included important names for the car that will be produced in 2024. The fact that the technology giant conducts its automotive activities very quietly and secretly gives rise to great hopes. Expectations will be so high that Apple Car, the production of which is not even known as a result of the survey, has managed to overtake giant brands.

Users trust Apple in every sense

Strategic Vision conducted a survey among 200,000 people. During the survey, respondents were asked about the brand of car they were considering buying. More than 45 brands took part in the survey, which Apple took part in. The result of the survey was very unexpected.

Toyota with 38% and Honda with 32% took the first place in the survey. Apple Car took third place with 26%. In a survey conducted on the basis of quality, Apple Car even surpassed Toyota and Honda in the first two places, receiving 24% of the votes. The success of a car that hasn’t even been unveiled yet is seen as an indicator of how big an audience Apple enjoys.

The Apple Car, which surpasses giant car brands such as Tesla, BMW and Audi, is expected to be produced as an SUV. It is also claimed that the seats of the car, which will have an interesting design, will be swivel.