Respawn Entertainment’s Apex Legends, released in February, was initially seen as an alternative to PUBG and Fortnite, and was flooded with players. Recently, most of the players are turning to other games because Apex Legends has serious server problems. Players express their reactions on the internet.

The changes in the game world and the demands from the players are the first parameters that affect the games and features published by the developers. Recently, the Battle Royale game genre has become popular, which has led to an increase in the number of such games.

Developed by Respawn Entertainment and Electronic Arts. Apex Legends, published on February 4, 2019, was one of the most important examples of this game genre. Apex Legends, in its first days with strong players like PUBG and Fortnite, has been faced with server problems nowadays. 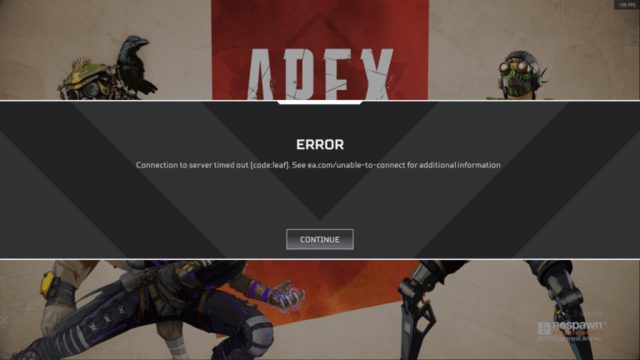 Players from Apex Legends, who came together in the game community on Reddit, reported problems with the servers. Some players, during the game encountered an error screen, and this situation is quite annoying, while some Reddit users have experienced a problem in the game shared the screen recording images.

The majority of Apex Legends gamers suffered from a similar problem, turning their reaction arrows into Respawn Entertainment. Players who want Developer Respawn to take action to solve this problem also expressed an expectation of an official statement.

Servers Freezing And Shutting Down. Matches not getting recorded. This is happening A lot now. Has this been happening to anyone else too? from apexlegends

If the date of the problem coincides with the New Year and the majority of the developer team is on leave, it means that server problems can continue for a while. While players have yet to come up with an alternative solution to this problem, Apex Legends is expected to see a significant drop in the number of active players. We will see together whether or not Respawn will provide an explanation of server issues and how to solve the problem.

Tyson Fury’s gloves, the English team says they are not cheats