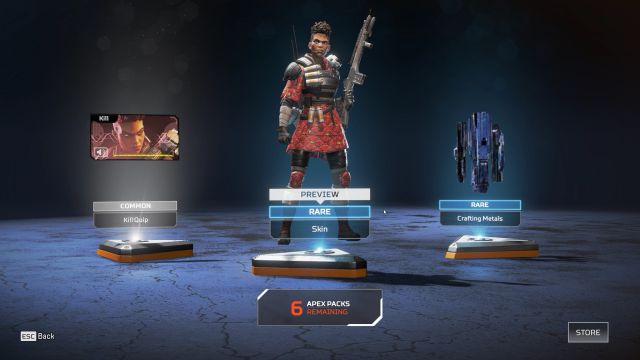 Apex Legends: Some users have expressed their dissatisfaction with the price of certain items that can be purchased in the video game. Respawn Entertainment has participated in an AMA dedicated to Apex Legends, which has been held on Reddit. It has been during this session that some players have expressed their disagreement with the price policy of certain cosmetic items in the title. The premium skins are priced at 1800 Apex Coins, which in real currencies is equivalent to about $ 18, that is, almost 15 euros to change. The study has defended itself and stressed that developing this type of content costs money and time.

“I understand that you have to make the game profitable, but there are ways to prevent the user from feeling ripped off when he buys something,” wrote x5hadau. “18 euros (actually 20), is a lot to ask for a cosmetic goal,” he complains, while asking if they have something in mind to change this situation. “People want to buy those things, but it’s hard to justify.”

Ryan K. Rigney, communications director for Apex Legends, explained that the monetization manager had been very hesitant to attend this event, as it is a hot topic that generates a lot of movement on Reddit. “However, he agrees to answer a few questions as long as I join him and support him.” During the question and answer session, Rigney said that setting prices is complicated and something that Respawn “constantly thinks about”, since his focus is to prioritize the gameplay. You also have to think about “the cost of the content.”

Although “people think” that they can launch cosmetic objects in a simple way, the team that is dedicated to it “is much smaller” and “invests more time in skins”. The part of the equation that users are unaware of is that developers “can’t work 24/7.” According to Rigney, “it is more expensive than people think in terms of the number of people and hours”, because behind a skin there is planning, art, creation, QA, and so on.

“We continually ponder this because we want Apex to be around for a long time,” adds Rigney. Being able to continue or not depends on the health of the business, so they hope that the players understand that they are working hard to balance the prices, but that you have to take into account “all the photography, it is a tough challenge.” New features, modes and maps also contribute to the overall cost, so it is necessary to consider all aspects.

Apex Legends works under the free-to-play model and is available on PS4, PS5, Xbox Series X, Xbox Series S, PC and Nintendo Switch. It will also be released on Android and iOS mobile devices.

Martha Is Dead: Where To Buy The Game, Price And Editions