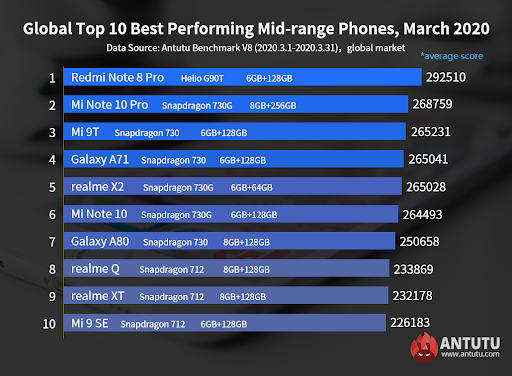 Measuring the performance of the phones, AnTuTu shared a list of the top 10 phones that performed best last month. Redmi Note 8 Pro was again at the top of the list.

There are so many names in the smartphone industry today that we hear that a new phone is launched almost every week. While some of these phones have successfully announced their name in the market, some of them are unfortunately disappearing. Of course, this situation is caused by users’ phone selections.

Users want the product they will buy when choosing a phone to be both high-end and low-priced. Of course, today, the phones with the highest features cannot be bought by everyone, but the most familiar devices in terms of price / performance are among the middle segment smartphones that provide comfortable use during the day and attract attention with their price. So which middle segment was at the top about phone performance last month?

Top 10 mid-segment phones in March:
AnTuTu, which measures the performance of smartphones, announced the top 10 smartphones of last month. The list prepared by AnTuTu was made according to the results obtained from AnTuTu Benchmark V8. Let’s add that the list is organized according to measurements between March 1 and March 31, and more than 1,000 devices are competing.

The names following the Redmi Note 8 Pro were also from Xiaomi, which was at the top in terms of price performance. Xiaomi’s Mi Note 10 Pro smartphone ranked second on the list, while Mi 9T ranked third. The fourth place on the list is Samsung’s new A-series phone, Samsung Galaxy A71, and the fifth place is Realme X2. The rest of the list was Xiaomi Mi Note 10, Samsung Galaxy A80, Realme Q, Realme XT and Xiaomi Mi 9 SE.