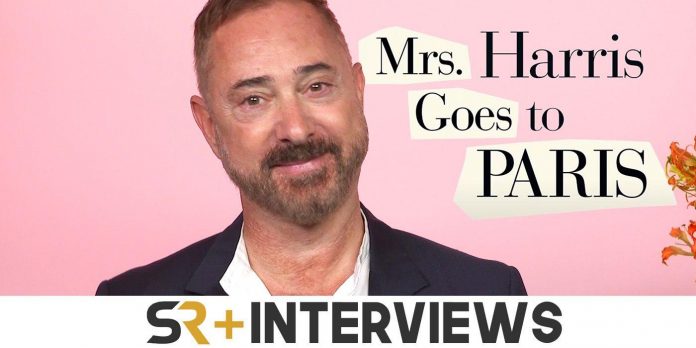 The film “Mrs. Harris Goes to Paris“, which is released in theaters on July 15, is based on the classic 1958 novel by Paul Gallico. The delightful story focuses on Ada Harris (played by Leslie Manville), whose life changes after she learns of her husband’s passing and forces her to chase a Dior dress all the way to Paris.

What begins as a newfound love of fashion soon turns into an adventure that changes the very face of Dior when the staff of the House in Paris arrive to find out what the power of Hell is. While chief clerk Claudine Colbert (Isabelle Huppert) not thrilled with the cleaning lady from London, accountant Andre Fauvel (Lucas Bravo, Emily in Paris) and high fashion model Natasha (Alba Baptista) are immediately attracted to her.

Screen Rant talked to Fabian about what Leslie Manville brought to the role, why he was attracted to the retelling of the story of Mrs. Harris going to Paris and how the creative team worked with the House of Dior to maximize great fashion.

Screen Rant: When I first saw the film, it seemed so original to me that I had no idea that it had such a long life, dating back to the conception of the House of Dior. What did you want to bring to this version of “Mrs. Harris Goes to Paris” that made it perfect for a revival?

Anthony Fabian: “Mrs. Harris Goes to Paris” has never been shown on the big screen. That was one thing that attracted me, the idea of creating it on a slightly more epic canvas. I also felt that there are aspects of history that need updating, and that it should be modern and fresh, but at the same time remain truly historical. It was really vital, and here was an opportunity to do it.

I am fascinated by the idea of collaborating with Dior and creating these dresses. What was it like, and how many words did Leslie say about which dresses Ada actually liked?

Anthony Fabian: We worked closely with the House of Dior. They gave us full access to their archives and architectural drawings, so we were able to recreate the interior of the Dior House exactly as it was.

We spent a lot of time trying to understand this fashion show. It was a source of absolute obsession for everyone, including the producers, who wanted to know the names of each dress. After all, Dior also lent us five dresses that they made themselves for the fashion show, and it was wonderful. We have a real Dior, as well as a recreated Dior, as well as three hero dresses that are actually inspired by Dior dresses, but are not exact replicas. That’s what I call Jenny Dior.

I like how Ada brings joy to everyone, even when she doesn’t feel it herself. Can you talk about what Leslie brought to this role and about working with her to bring out the best in Hell?

Anthony Fabian: Leslie is one of the most extraordinary actresses that any director can hope to work with. She comes incredibly well prepared with a very clear idea of who this character is and what she wants to get out of him. She creates a character not in three dimensions, but in four dimensions. I have to say that she makes my job a lot easier. I don’t want to take anything away from the other actors, but she is so busy with it all the time that I have relatively little involvement – [nothing] is required except the most fine-tuning.

But we discussed the character; we discussed the accent, and we discussed so many different aspects of how we wanted her to be portrayed so that she wasn’t just sweet, kind or simpering. She has strength and growing confidence in this adventure she is going on.

In 1950s London, a widowed cleaning lady falls madly in love with a Dior couture dress and decides she should have her own. After working on raising funds to realize her dream, she embarks on an adventure to Paris that will change not only her own worldview, but also the very future of the House of Dior.