Home Sport Ansu Fati: Neither with the first team nor with the youth? 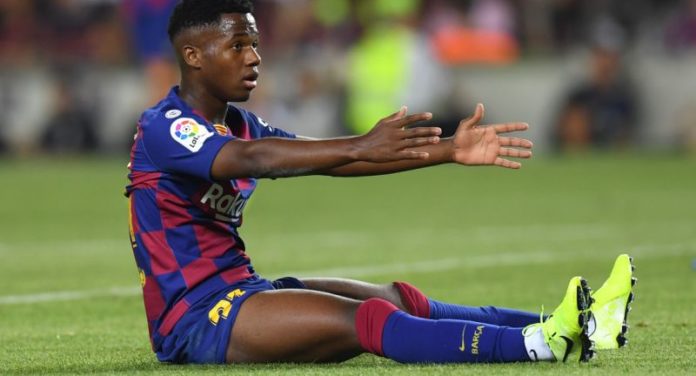 Ansu Fati’s life is going too fast. About to turn 17 he has seen how in just two months he went from playing in the youth to debut with the first team and cover the spotlights and also get an express nationalization and debut with the sub-21. A dream for a young soccer player.

But since he acted in the last minutes of Barça-Villarreal at the end of September he has not returned to play with the Barça shirt. Despite being summoned in virtually every game, he has not played a single minute. His only moments of short lived in the Spain-Montenegro U21 where he performed 11 minutes.

It could be thought that without a day for Barcelona due to the postponement of the Classic, Fati could have minutes – and incidentally recover sensations – with the subsidiary, but Barça’s technical staff has preferred not to do so.

In the previous break by selections and despite not being summoned in the first instance with the ‘rojita’ he stayed training with the first team instead of being summoned with the youth – or even reinforce Barça B – and be able to enjoy minutes.

The game against Valladolid next Tuesday where Dembélé, one of the players who is closing the way right now, is sanctioned could return the opportunity to feel again a footballer.

Valverde has said on several occasions that Fati stays in the first team of Barcelona and that he has a situation shared by Carles Pérez, the other young Barca pearl whose emergence happened at the same time as Ansu’s and that he has not enjoyed minutes in the last month.