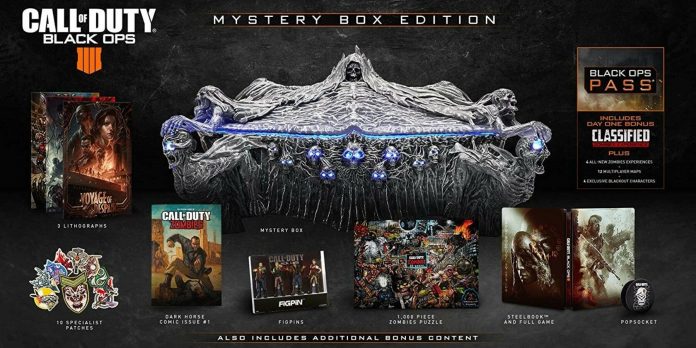 Over the years, Call of Duty has released several intriguing collector’s editions, and for the next Treyarch game, this concept should be revived. Die-hard fans of the series were able to collect real RC-XD cars and night vision goggles, as well as many other bonuses such as art books and badges. Although there have been no collector’s editions in the last two games of the franchise, it would be nice to see them return in the next issue of Treyarch.

Treyarch perfected the art of collectible editions in Call of Duty: Black Ops 3 and Call of Duty: Black Ops 4, as the most expensive sets of both games relied heavily on zombie-based content. Not only is the Zombie community extremely enthusiastic, which guarantees interest in these releases, but the mode is full of unique weapons and items that can be turned into expensive props in real life. Thus, Treyarch has only touched the surface of Zombies merchandise, and the collector’s edition of Call of Duty 2024 will undoubtedly be exciting for longtime fans.

For many, Call of Duty: Black Ops 3 is considered the peak for zombies, and the Zombies Chronicles expansion followed an already excellent DLC season. However, even before the super-fans experienced the powerful gameplay of the mode, the scene was prepared through an exciting collector’s edition. The main attraction was a fully functional mini-refrigerator Juggernog, which perfectly repeated the in-game model, as well as several Perk-a-Cola coasters and a magnificent steel book on the topic of zombies.

While opinions about Chaos Story were mixed, the collector’s edition of Call of Duty: Black Ops 4 was another big hit as it gave fans access to a working version of the mysterious box of the new narrative. Although the box is much smaller than the box from the game, it lights up when opened and makes noise, and there is enough space inside to store other items. This edition also included a unique zombie-themed puzzle, as well as several large lithographs based on the three main launch maps. Also included were some neat Chaos Team figpins and the first issue of Chaos-themed comics, making a package that leaned even more on zombies.

Considering how fun and unique the Black Ops 3 and Black Ops 4 collector’s editions were, the new Treyarch collector’s edition should match the quality of these packages. To do this, he will need one basic item along with a Mystery Box or a Juggernog mini-refrigerator. Fortunately, the developer has many options. A working Monkey Bomb can be an interesting choice, as can a replica Ray Gun. Many unofficial models of Miracle Weapons have been created by fans over the years, so an official model that glows and makes noise is also possible.

While the main draw is likely to be something like a replica of Monkey Bomb or Wonder Weapon, Treyarch can go more traditional if he wants. It would be cool to see a statue of an iconic zombie character like Tank Dempsey fighting hellhounds, as well as a figurine of a memorable mini zombie boss like tank soldier. A recording with all the hidden Zombie songs over the years would be another fun item, especially if it also has music from the 2024 game.

As for small collectibles, Treyarch again has a lot of options. It would be interesting to see a small model or a Pack-a-Punch keychain, as well as a few more curly pins with characters such as Samantha Maxis, or another puzzle. In its recent Zombie modes, Treyarch has teased wonder weapons with blueprints that show how the weapon was made and describe its functions, so perhaps posters with blueprints will be a fun addition to the collectible line. Patches with the Perk logo or even bottle caps are another fun feature. While expected items like the stilbook are sure to be featured, Treyarch has a lot to do with all the other items in the hypothetical collector’s edition of Call of Duty 2024.

The new “Guardians of the Galaxy 3” character Supports the GOTG...