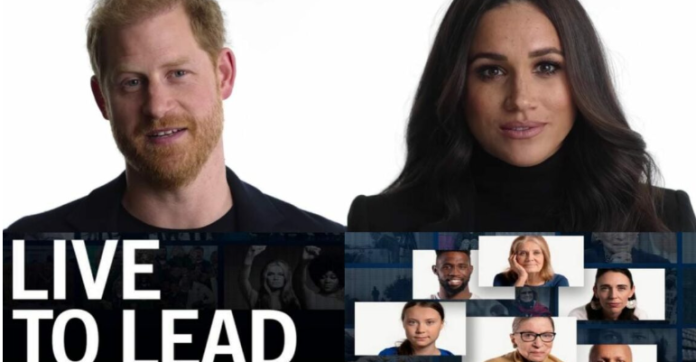 The world has barely recovered from the harsh Netflix documentary series “Harry and Meghan.” However, it looks like the Sussex couple has something else in store for us. The violent reaction that seemed to interfere with the documentary series turned out to be in vain. In fact, seeing the Duke and Duchess succeed on a global scale when the British media is melting has become an early Christmas gift for fans. After that, the Duke and Duchess of Sussex took another step in the face of rumors that Netflix is abandoning its multimillion-dollar deal.

Prince Harry and Meghan release official trailer for their new series, "Live to Lead," which features different leaders reflecting on their legacies and discussing what leadership means to them. https://t.co/EOsW6kbjZk

The steamer remained faithful to its business connections. However, the upcoming series is not related to any of the Sussex personal life stories. A couple of hours ago, Netflix took to Twitter to announce the premiere of the recently launched series. It is said that the series called “Live to Lead” was inspired by a great South African anti-apartheid activist, who at one time was the country’s first president.

Harry and Meghan will become executive producers of the new Netflix series.

It should also be noted that the series appeared after the Mandela family rolled their eyes at the couple. It is reported that his grandson criticized the Duchess in an interview with The Mail, talking about Meghan Markle and some of her controversial remarks about the customs of Great Britain and South Africa. In fact, Mandela’s official Twitter account proudly announced the start of the series. The official trailer for the long-awaited series seems to focus on people whose “actions save our world.”

The Foundation is proud to announce the launch of a new Netflix Series on effective leadership in collaboration with Blackwell & Ruth & Archewell Productions, inspired by the legacy of Nelson Mandela.

Live to Lead premieres December 31 only on @netflix pic.twitter.com/3Ysm5kkvV4

The reports also claim that the couple from California will be the executive producer of the film. Embodying the rumors, Prince Harry and Meghan Markle also appeared in a short part of the trailers themselves. This makes it quite clear that soon these two will be talking about the upcoming Netflix project. But what can we expect from the series and when?

What is Live To Lead about?

According to the tweet, the premiere of the series is scheduled for the day before the New Year, December 31, 2022. It is reported that the series will shed light on the work of Ruth Bader Ginsberg, the late Justice of the Supreme Court of the United States, Greta Thunberg, Gloria Steinem, and other world-famous personalities who contributed to making the Earth a better place to live. In a two-minute preview, the prince began the narration with the words: “It was inspired by Nelson Mandela, who once said: “It’s not just the fact that we lived that matters in life.”

Their voices give us hope.
Their actions shape our world.
Their leadership inspires our future.

Live To Lead — a documentary series presented by The Duke and Duchess of Sussex — premieres December 31 pic.twitter.com/zhhxChEi3Y

The clip then immediately cuts to his wife, the Duchess, who adds: “It is what we have changed in the lives of others that will determine the meaning of the life we lead.” Revealing more about the same, the duo will soon move on to their next work in progress just weeks after their series of documentaries hit the streaming service.

Are you excited to watch another Netflix project by Prince Harry and Meghan Markle? Share your thoughts with us in the comments below.