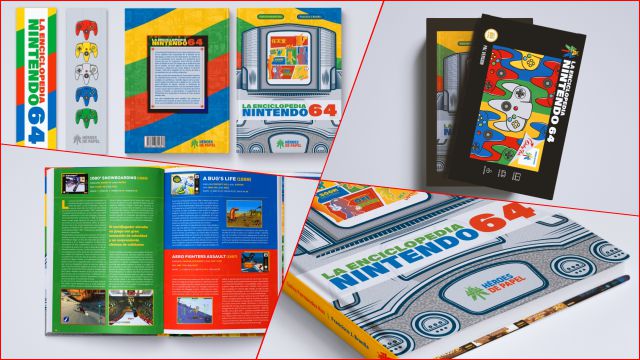 Nintendo 64: The Spanish publishing house, led by Salvador Fernàndez Ros and Francisco J. Brenlla, collect in this volume the entire history of the mythical console. The publisher Héroes de Papel has made official one of its great releases for this year: The Nintendo 64 Encyclopedia. Dedicated to the unforgettable home console of the Japanese firm, this book reviews the complete life of the machine with its most outstanding works. Salvador Fernàndez Ros, journalist and editorial coordinator of MeriStation, together with Francisco J. Brenlla, a collaborator of this same house, sign a manuscript product of an in-depth investigation where a video game library is held to remember.

Defined as “an exhaustive review” of a fundamental period for the electronic entertainment sector, such as the leap to three dimensions, The Nintendo 64 Encyclopedia addresses not only the creation of the machine, but the trajectory of the fourth console in history from the Kyoto company, originally launched on June 23, 1996.

What we once knew as Ultra 64 translates into this essay with about 250 reviews of some of the most representative Nintendo 64 video games published in Spain; although a space is also dedicated to those works unpublished here that only saw the light in North America and the country of the rising sun. All included titles have been replayed by the authors and are accompanied by their original full-color covers.

The book includes, exclusively, an interview with testimonies from Nintendo Ibérica from within, a meeting in which the most important moments of the console in Spain are narrated; from its release to the non-translation of The Legend of Zelda: Ocarina of Time, the competition with PlayStation, etc. “A journey through the market and press reception, the technical specifications, the revolutionary analog controller, the peripherals and also some of the promising canceled games that never came to be.”

The Nintendo 64 Encyclopedia opens its reservations today, June 23, 2021, with the aim of reaching the shelves of bookstores and department stores this September 21 in two editions. One of them, standard, published in hardcover and in full color; the other, a special limited edition, will be sold until June 30 only from the Heroes de Papel website for silver and gold members of their community. From that date, access will be given to all while stocks last. Said special edition will include the book; a box with exclusive design and luxury finish; a set of seven cards with the great milestones of this Nintendo console; a keychain of the iconic Nintendo 64 controller; a certificate; and a bookmark.