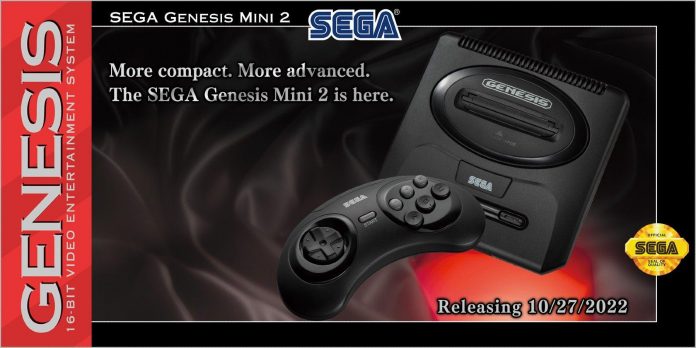 The era of mini retro consoles continues as some gaming companies seek to introduce their old line of games to modern gamers and renew passionate fans of the originals, including the classic Sega Genesis console. Sega has announced the second Sega Genesis mini-game, which comes with its own line of games, different from the original version.

In addition to the 50 new Genesis games and the Sega CD with the Genesis Mini 2, Sega confirmed that this mini console “boasts even more power,” which takes us back to the days when Sega claimed that its consoles do what “Nintendo doesn’t do.” Some titles that have already been announced for the classic Sega console are After Burner 2, Sonic CD, Splatterhouse 2, Vectorman 2 and others. Sega also stated that the Genesis Mini 2 will offer a never-released bonus game that cannot be presented before the Sega Genesis Mini 2 launch on October 27.

Long-time Sega fans who complained that the Sega Genesis Mini has the design of the original model and a 3-button gamepad can rejoice at copying the second model in the sequel and using the popular 6-button controller. Gamers waiting for the Genesis Mini 2 release can already pre-order the mini console to make sure they get it for $103.80 on Amazon, and the shipping cost will increase. The Sega Genesis Mini 2 will come bundled with one wired controller, a USB power adapter, a power cable and an HDMI cable, and it will also be possible to purchase separate 6-button controllers, as for previous consoles.

Many Sega fans who had hoped for the release of the Mega Drive Mini 2 in the west received the announcement of the Sega Genesis Mini 2 with noticeable enthusiasm, many indicated that they were hoping for a version of the classic console with a 6-button gamepad. Due to the unexpected nature of the mini-platform sequel, some stunned gamers asked if the announcement was even real, while others asked for the Saturn and Master System mini-platforms. Among the games requested by longtime Sega fans in response to the announcement of the Sega Genesis Mini 2 are Night Trap, Popful Mall, Truxton and Terminator CD.

The showrunner of Strange New Worlds explains the reference to the...