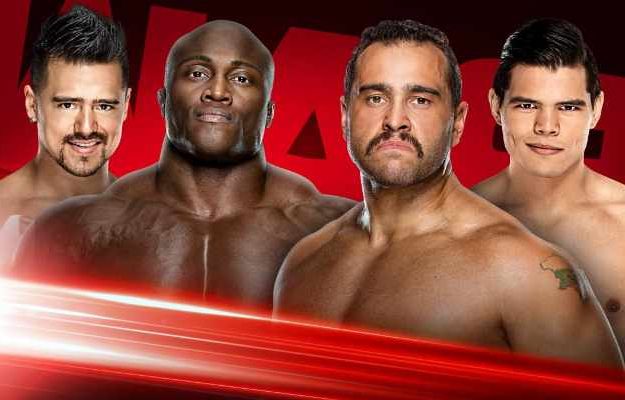 WWE has announced on its social networks a new fight for WWE RAW next week. Bobby Lashley and Angel Garza will face each other against Rusev and Humberto Carrillo.

In this way the red mark show will include two feuds in a single fight. Bobby Lashley and Rusev have been months of rivalry since what happened with Lana. Angel Garza has two weeks of feud with his cousin Humberto Carrillo, since the first began his alliance with Zelina Vega.

After a couple of weeks with no sign of the rivalry between Rusev and Bobby Lashley, it seemed that WWE had already terminated this feud. Finally it will not be like that and they will have one more fight involving both talents.

Lana and Zelina Vega start the fight in the face of WWE RAW
Lana and Zelina Vega, the managers of Rusev and Angel Garza respectively, were personally responsible for lighting the spark for the fight next Monday. First it was Lana’s turn that said this through social networks.

The two sexiest WWE couples will join forces in RAW to eliminate their enemies. With me in his corner, my precious Bobby Lashley will team up with Angel Garza (c / Zelina Vega) against the disgusting of my ex-husband and the disgusting cousin of Angel Garza.

The 2 sexiest couples in @WWE will combine forces on #RAW to eradicate their enemies. With me in his corner, my beautiful @fightbobby will team with @AngelGarzaWWE (w/ @Zelina_VegaWWE) against my putrid ex-husband @RusevBUL & Angel Garza’s disgusting cousin @Humberto_WWE

Angel Garza and I can’t wait for Monday to arrive.

Likewise, just to remember it, there is no Valentine here. Angel Garza and I are strictly business.

.@AngelGarzaWwe & I can’t wait until Monday.

By the way, just for the record, no Valentines here. Angel Garza and I are strictly business. https://t.co/45ROUkTcTt

Do not forget to follow Somag News , the WWE website to not miss what is happening in the world of Wrestling or any of the WWE News . Don’t miss anything!