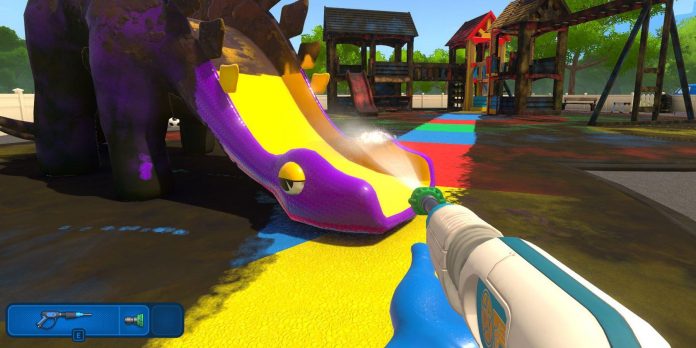 Tokyo Game Show 2022 started on September 15, and announcements immediately began to appear, including the announcement that the FuturLab PowerWash simulator will appear on the Nintendo Switch, PS4 and PS5 “soon”. The unique simulation game was originally launched on July 14 for PC and Xbox consoles, and a specific release date for other platforms has not yet been announced.

PowerWash Simulator, published by Square Enix Collective, a division created for independent games and developers, puts players in the role of a professional electric cleaner. The game has a career mode in which you can play alone or with another person using a collaborative online game in which players have to do dirty work in the city of Mackingham. In free play mode, up to six friends can have fun together, trying to complete any task that the main player has already completed.

Now the game, which PC and Xbox players have appreciated for months, will appear on Switch and PlayStation consoles, although Square Enix did not specify when exactly. While it may seem like an unlikely subject for a video game, PowerWash Simulator has been received quite positively since its launch in July. On Metacritic, its user rating on PC is 7.5, and players on Xbox Series X/S gave it an average score of 7.9. However, on Xbox One, it has only four user ratings, which give a score of 6.0.

The appeal of PowerWash Simulator lies in the satisfaction that systematic cleaning of graffiti, moss, mold and all kinds of dirty places brings. Players will of course clean dirty cars and sidewalks, but there are a lot of interesting things to clean up in PowerWash Simulator, including a playground with a Stegosaurus slide, an abandoned subway station and even a crime scene.

The game provides players with various tools and improvements to work with, as well as washers, nozzles, cleaning fluids and extension cords that will help them perform various tasks. And Mackingham’s new professional cleaners can personalize their washing machines, clothes and gloves in PowerWash Simulator with skins that can be purchased for in-game currency. The game also has a challenge mode that tests the player’s ability to clean up quickly in a time trial or use as little water as possible in a water challenge.

On the first day of the Tokyo Game Show, a number of announcements were made, including the unveiling of a new ninja hero Kiriko for Overwatch 2, new trailers for long-awaited games such as Forspoken from Luminous Productions, and confirmation that Deathloop, exclusive to the PS5 console, will be released on Xbox Game Pass on September 20.

PowerWash Simulator is currently available on PC, Xbox One and Xbox Series X, and versions for Switch, PS4 and PS5 will be available soon.