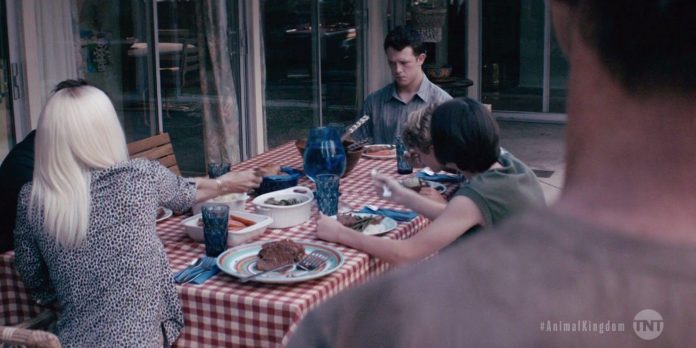 Pope (Hatoshi), Craig (Robson), Deran (Weary) and Jay (Cole) embark on their own journeys in the finale of The Animal Kingdom series. “Fubar” allows you to look into the state of mind in which these characters were when “Animal Kingdom” was just beginning, inviting viewers to think about how far some of them have come. Despite weeks of preparation aimed at keeping Cody’s four men on the same wavelength, “Fubar” couldn’t separate them any further. After creating these characters for six seasons, it is impossible to find an ending for each of them that seems adequate, but the Animal Kingdom challenges this concept to its absolute limit.

Animal Kingdom challenges how dark the series finale can be. No matter how gloomy the finale of each series may be, the task of the actors and crew to ensure a decent end to the series is a heavy burden. Animal Kingdom handles it pretty well, managing to pull viewers out of the Oceanside landscape they’ve been trapped in for weeks, and survive the latest robbery with Cody’s family. With the environment and the four strong characters created by the Animal Kingdom in Pope, Craig, Deran and Jay, it’s impossible for all of them to have an ending that would leave everyone happy. Therefore, the “Animal Kingdom” does not end with a happy ending for everyone. In fact, a crime thriller does not end with a happy ending for anyone.

Of the colorful cast of Animal Kingdom, Pope undoubtedly had the most dangerous journey. From the very beginning of the series to “Fubar”, Pope was always under someone’s control. “Fubar” finally asks Pope to make decisions for himself, and thus Pope confirms that he has never truly forgiven himself for the choices he has made throughout his life. Pope’s guilt played a fundamental role in his journey throughout the last season of Animal Kingdom. “Fubar” is no exception, but it allows Pope to finally come to terms with himself. There is no better ending for him that his character could get. Hatoshi plays this role to absolute perfection for the last time, as he brings a permanent fragility to Pope that is far more tragic than intimidating.

One of the highlights of the Animal Kingdom finale is Pope’s final act. As with the rest of the sixth season of Animal Kingdom, “Fubar” uses the climax of flashbacks to create a meaningful environment for the remaining characters. Thanks to this, it became obvious that Pope never turned away from the Smurf. Everything he had ever done was for her, no matter what it cost him. “Fubar” builds on this flaw in Pope’s character, allowing him to correct the mistake that started the “Animal Kingdom”. Having failed to save Jay from the life he will soon endure with Julia after his birth, Pope uses his last act to save him when he has many motives not to. Pope’s guilt in choosing Smurf over Julia clouded his character’s mind, especially in season 6. By burning down Cody’s house, Pope left the memory of the Smurf behind and corrected this mistake.

As disappointing as it may be for some, Jay’s journey is coming to a worthy conclusion. Not so long ago, Jay and Craig remembered Jay’s arrival at Cody’s house, where he almost drowned. Accordingly, J meets its end in almost the same way in “Fubar”. A reflection of Jay’s journey also takes a heartbreaking turn in the finale of Animal Kingdom. To save himself, Jay forces Penny to die from a drug overdose. Knowing about his mother’s fate, Jay’s decision to kill Penny the way he does takes a heavy toll on him, and it shows. Penny’s death eventually destroys Jay’s last hope, allowing his typical stoic expression to crack, revealing Jay’s human side, which was rarely seen throughout the Animal Kingdom.

Another memorable scene of the series finale is the moment when Deran, Craig and Pope are forced to realize that they have been betrayed. Since Deran, Craig and Pope realize that the end is near, it is impossible not to be involved in this moment with them. The suffocating atmosphere that the animal kingdom created in many previous robberies of the Cody family led to this. For a family that has not always expressed their feelings for each other, there is too much left unsaid among them, which Weary, Robson and Hatozi managed to convey with their latest views on each other.