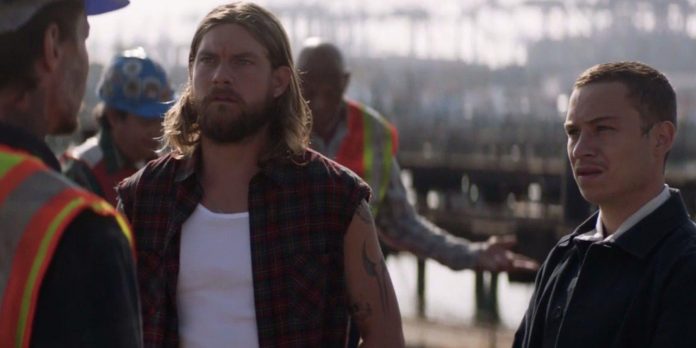 “Clink” provides Animal Kingdom with its first real look at what happens when the Cody family actually gets what they deserve. With Pope (Shawn Hatosy) in prison, Deran (Jake Weary), Craig (Ben Robson), and J (Finn Cole) have never had a more unified goal. Unfortunately, their unity once again turns out to be difficult to stick with, as their individual goals begin to take precedence. Their final decision has the potential to be the most dangerous job the Codys have ever pulled, which may truly mark the end of an era.

After the emotional peak of Animal Kingdom’s previous episode, “Clink” prepares the crime thriller for its final ride. Last week, Pope found himself in a dreadfully precarious situation that put the entire Cody family on edge. “Clink” moves forward with that momentum, using Pope’s incarceration to expose where Craig, Deran, and J’s priorities actually lie. Despite the united front the four Cody boys try to exude, “Clink” presents their unraveling from the inside out.

Pope might be the only Cody behind bars, but he isn’t the only one suffering. As one of the most formidable Cody boys, others in Oceanside have begun to take advantage of Pope’s absence. Past allies turned enemies have resurfaced to take their pound of flesh, while some of the Codys deem it a reasonable time to make some drastic changes. Craig, Deran, and J weigh their options on what they could do to get Pope out of jail, and what that might cost them. Pope’s incarceration also puts pressure on Craig, who is still struggling to decide how to choose between the two halves of his family: his dedication to the Codys and their business, or being with Renn and his son in Texas.

Even with limited screen time, Hatosy continues to give a compelling performance as Pope. His devotion to accepting whatever punishment rolls his way is a culmination of the guilt he has carried around with him his entire life. He has always done what was expected of him despite his personal feelings, and it has taken a hefty toll. With Hatosy’s limited screen time, Weary steps up to the plate and gives an engrossing performance throughout “Clink.” Weary is stellar on his own but in scenes with Animal Kingdom’s main and supporting cast, he demonstrates how complex he and his character are. Weary and Hatosy share another memorable scene in “Clink,” as their ability to draw off one another continues to steal the show.

One of the most transfixing scenes of “Clink” is the prison scene between Pope and Deran. As the only one who appears to genuinely be concerned about Pope’s wellbeing, Deran goes to visit Pope. The scene has the ability to become overly emotional or tense, and Animal Kingdom dances on the fine line between the two. Pope and Deran both appear remorseful, as Pope is strangled by the weight of his actions and Deran tries to find a way to save Pope from himself. The delicate scene grows tense once Deran suggests taking care of the witnesses to help Pope’s case. Already imprisoned for harming someone he cared about, Pope is naturally against the idea. What happens to Pope in “Clink” only sends Deran further down the rabbit hole as he grows increasingly protective over his older brother.

As if Deran’s character hasn’t seen enough trouble over Animal Kingdom’s six seasons, “Clink” reminds viewers that there is one threat to his character that could uproot everything. After a break-in at his bar, Deran accuses Tommy, who proves his loyalty to the Codys once again and talks Deran off the ledge. Tommy draws the comparison between Pope’s admission to killing Catherine to Adrian’s absence. Unlike Pope, Deran was unable to kill Adrian when he was ordered to and is now being punished in his own way. Adrian has been missing from Animal Kingdom following his departure in the season 4 finale, where he was forced to flee the country. In revitalizing Adrian’s memory, Deran may begin to seriously contemplate Craig’s own dilemma for himself, and finally leave the country to join Adrian.

Where Pope could be considered the most selfless of the Cody family, J is easily the most deceitful. J continues to wear a mask when he is with his uncles, which casts a dark shadow over “Clink.” He refuses to acknowledge how any of the others feel about his fatal suggestions and his casual attitude when doing so, is terrifying. Even when the others chastise his plans, J is unwilling to let them go and takes things a step further. J’s deceit to willingly kill members of their family prove that even though Smurf and Baz are physically absent from Animal Kingdom, their memory is very much alive. The ambiguity of where J’s allegiances actually lie creates a suspenseful atmosphere within Animal Kingdom that could blow up in his face in an extremely Baz-like fashion.

On a literal level, “Clink” refers to Pope’s incarceration, but it also serves as a warning to the other Codys on what may soon await them. The episode title loosely refers to their new plan to spring Pope from prison, planting the idea of a Shawshank Redemption-style plan. “Clink” does slow things down a bit from where Animal Kingdom has been the last few weeks, but it isn’t a wasted episode. As the Codys plan to move forward and leave Oceanside behind, there are too many external and internal threats that could soil their plan. With only three episodes left in the crime thriller, the chance that everyone gets away from this incredibly dangerous job clean is becoming further and further out of reach.

Seasons 1-5 of Animal Kingdom are now streaming on Amazon Prime.

Riverdale Season 6: Whose Funeral Is Episode 7 Of The CW...