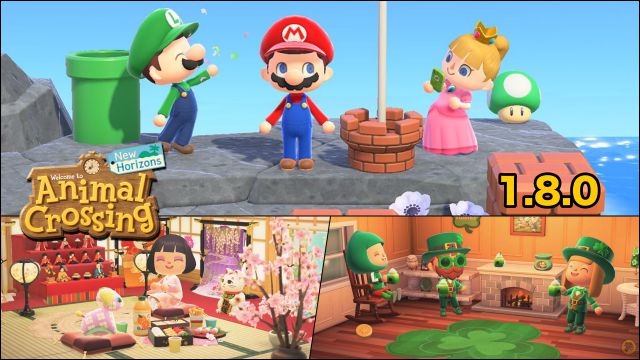 The new themed event on the occasion of the 35th anniversary of Super Mario is close to the hit Nintendo Switch game. Update now available.

Nintendo has released version 1.8.0 of Animal Crossing: New Horizons for the Nintendo Switch. The long-awaited update can now be downloaded worldwide to include the contents of the upcoming Super Mario Bros. themed event on the occasion of its 35th anniversary. Although the event does not start until Monday, March 1, we can already anticipate some of those news on our console.

The Animal Crossing: New Horizons + 35th Anniversary Super Mario Bros. event will bring items such as the Super Mushroom and the “?” Block to the Nintendo Switch title. in the form of furniture, so that we can place them where we want. Pipes can also be placed that will allow us to travel between different points of the island at full speed, as if they were checkpoints. After downloading the update, Super Mario Bros. items will be available starting March 1.

To update the game is very simple: just have our Nintendo Switch connected to the Internet, click on (+) from the title icon and click on Update. In just a few seconds or minutes we will have the game perfectly updated.

Upcoming Animal Crossing Events During the Month of March

Regarding the March events, we highlight the Hinamatsuri from February 25 to March 3 with content from the Peach Festival; on March 17, the Irish holiday of St. Patrick’s Day, which will allow us to buy Soda, Plates and Carpet of said anniversary between March 10 and 17; and Pi (π) Day on March 14 to celebrate math.

With more than 31 million units sold, Animal Crossing: New Horizons is one of the biggest phenomena of recent years at Nintendo. The game is available exclusively for Nintendo Switch. You can read our original analysis here and consult our game guide at this link.